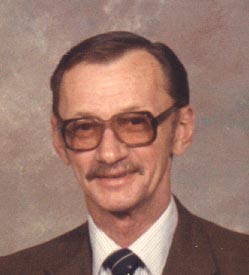 Age 79, died Saturday morning, March 4, 2006 at Cherry Meadows with his family at his side. Robert was born July 17, 1926 in Appleton, the son of the late John E. and Mary (West) Kerscher. On January 25, 1950 he married Elaine Belling in Kaukauna. Robert retired in 1988 from Thilmany. He was a member of St. Aloysius Catholic Church. In his earlier years he was an active member of the Kaukauna Athletic Club and played ball for Woltd‚Äôs Ranch Bar, Kaukauna. Robert and his father formed the Fox River Beagle Club. He was an avid Packer and Nascar fan and enjoyed his favorite #8. Robert enjoyed spending time up north and hunting and fishing with family and friends.

Robert will be deeply missed by his family and is survived by his daughter, Debra (Alan) Stievo of Oshkosh; son, John (Tina) Kerscher of Kaukauna; four grandchildren: Matthew and Michelle Stievo and J.J. and Heather Kerscher; sister, Ellen Clawson of Kaukauna and sister-in-law, Helen Kerscher of Los Lunas, New Mexico. He is further survived by nieces, nephews, other relatives and friends. Robert was preceded in death by his wife Elaine, three brothers, James, John Jr. and Tom Kerscher.

Private family services will be held. Interment will take place at St. Mary Cemetery, Kaukauna. The family would like to express special thanks to his caregiver Sandy for her excellent care and compassion and thanks to the entire staff at Cherry Meadows.