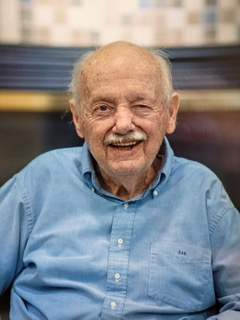 Robert Albert Kenney passed peacefully in Appleton, Wisconsin on September 11, 2020 at age 94. He was a loving husband, wonderful dad, amazing grandfather, and caring friend to all he knew and loved. Bob was born on September 8, 1926. He was the son of Albert and Charlotte (Apel) Kenney of Milwaukee, Wisconsin.

After graduating from Rufus King High School in Milwaukee, he enlisted in the U.S. Army. Following his service during WWII, he returned home and attended Wisconsin State Teachers College in Milwaukee. Bob was a self-made man. He got himself through college on the GI Bill, taught school in Appleton, WI with two young children at home and somehow went back and put himself through dental school. From 1959 to 1963, Bob attended Indiana University School of Dentistry in Indianapolis, Indiana. Following his return to Appleton, he established his dental practice that served the needs of patients in Appleton and the Fox Valley for decades.

At 17 years of age and perhaps only weighing about 125 pounds he lied about his age so he could enter the service and defend his country; “The Greatest Generation” lost an exemplary member today. In January of 1945 he charged off an LCI (Landing Craft Infantry) into enemy fire in Luzon, Philippines. He was eventually a part of the occupying force in Japan.

He met his future wife, Patricia Hurless, at the wedding of his best friend. He married Patricia on June 11, 1952 at Roosevelt Drive Presbyterian Church in Milwaukee. Shortly after the wedding they each began work in master’s degree programs at Indiana University. They returned to Appleton where he became the proud and loving father of two children, Michael and Susan. During their Appleton years, Bob and Pat enjoyed boating on Lake Winnebago and in Door County, and getting together with their friends to participate in such groups as Supper Club, Basement Theater, and Adventure Club, a group which travelled to fun and exciting places. Following Bob’s retirement, Bob and Pat enjoyed a very full, active and happy life in Naples, Florida where they were members of the United Church of Marco Island.

Perhaps foremost of Bob’s many wonderful qualities was that of a loving husband. His marriage with Pat reflected a deep abiding love for her. Nothing was more seismic in his life than Pat’s unexpected death in 2015. While he survived another five years, his love of her was ever present. Bob has now been reunited with Pat.

Many thanks and love go out to the loving caregivers at Touchmark Senior Living.

A private family memorial ceremony will be held at a later date to be announced. No flowers or sadness please, only prayers and fond memories celebrating his life and the lives of the many he touched.