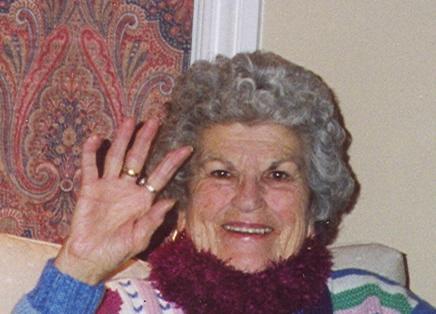 Marita Sophia Kons was born on October 21, 1924, Little Chute, Wisconsin to John and Odelia (Schaumann) Kons. Sadly, Odelia died a few days after giving birth to Rita. Rita was finally able to meet her mother on October 31, 2006 when Jesus called her home.

Grandma Schaumann cared for baby Rita until age two when she returned home to the Kons family where her eldest sister, Laverne, lovingly cared for her while their father John worked in the paper mill.

After Al passed away in 1996, Rita continued to live in the home that Al and his brothers built in 1953 on East Glendale Avenue in Appleton. Rita loved and was loved by her many friends and neighbors. Rita had a special bond with Phyllis and Oliver Warner, her next door neighbors for 52 years.

Rita will be remembered for her kind words, zest for life and generous personality. Some of the family‚Äôs fondest memories are of weeks spent at the Chain-O-Lakes cottages in Waupaca. In Rita‚Äôs younger days she enjoyed bowling, swimming at the YMCA and riding her bicycle. In later years she could be found spending time with her kids and grandkids, especially Friday night fish fries and playing sheepshead and 500 Rummy with family. Fischer family get-togethers will not be the same without the delicious seven layer salad, potato salad and hot beef that Rita traditionally prepared.

The Fischer family extends a sincere thank you to the nurses and staff at Franciscan Care Nursing Home, Cherry Meadows Hospice, and ThedaCare At Home; especially Clysta, Teri and Dana. Also thank you to Father Gerald Falk for his frequent prayer visits and for the kindness he has shown the Fischer family.

The funeral liturgy for Rita will be held at 11:00 a.m. on Monday, November 6, 2006 at ST. THOMAS MORE CATHOLIC CHURCH, 1819 N. McDonald St. with Fr. Gerald Falk officiating. The family will receive friends at the church on Monday from 10:00 a.m. until the time of mass.