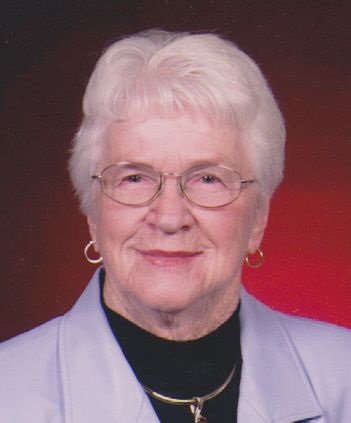 Rita A. Lemmers, 95, a longtime Kimberly resident, passed away on Monday, September 9, 2019, at St Paul Manor in Kaukauna.

Mom was born on June 9, 1924, the seventh of nine children to the late John and Mary (Behling) Josephs. She was a 1942 graduate of Kimberly High School and married her high school sweetheart, Carl Lemmers, on January 19, 1946. Dad preceded her in death on August 23, 2016, after celebrating 70 years of marriage.

Mom and dad started out their marriage in Appleton before buying their first home in Kimberly in 1952. They stayed in the Kimberly area before moving to St Paul’s Villa in 2015. In 1975 they purchased land in Breed and enjoyed many years and good times with family and friends at “the trailer”. Mom and dad also enjoyed traveling, especially with the Grafmeiers and Suberts, and were able to see much of the United States on their road trips. Mom was a great cook, kept an impeccable house, was a wonderful seamstress and loved to fish.

The funeral liturgy for Rita will be held at 4:00 PM on Monday, September 16, 2019, at Holy Spirit Parish, located at 600 E. Kimberly Avenue in Kimberly, with Msgr. Jim Vanden Hogen officiating. Burial will be in the parish cemetery. Family and friends are invited to gather at the church on Monday from 1:00 PM until the time of the mass.

Our family would like to extend our sincere appreciation for the love and care mom received at St Paul Elder Services (both the Villa and the Manor) and from Theda Care hospice. Your kindness, compassion and thoughtfulness will not be forgotten. Sr Delores, thank you for praying with us and helping us through a difficult journey.

“Queen Bee” has left the building.