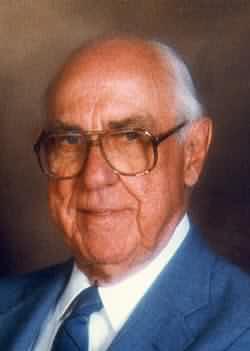 Age 85, died peacefully on Monday, July 30, 2001. Richard was born on August 9, 1915, in La Crosse, Wisconsin, son of the late George and Matilda (Bogasch) Martinek. He married Clara Hoffer on November 22, 1940, and they enjoyed 54 years of marriage, until she preceded him in death in 1994. Richard received a football scholarship to attend Northwestern University, and earned a B.S. in Civil Engineering in 1937. He then began employment at Kimberly Clark, where he retired in 1972; after 35 years. He was also employed at Appleton Wire for 11 years, until his retirement in 1983. Richard was a charter member of St. Bernard Catholic Church. He also was a member of the Eagle Scouts, Phi Kappa Psi, TAPPI, and PIMA. He was also a past chairman of the National Coating Committee of TAPPI. Richard will be greatly missed by his 2 daughters, Sharon Ann (Mark) Meythaler, Bedford, Texas; Kim Martinek (Chandru) Paspuletti, Sandisfield, Massachusetts; his 2 sons, Richard Guy (Darlene) Martinek, Plano, Texas; Guy Hoyt (Vicki) Martinek, Appleton; 9 grandchildren, Kara and Courtney Meythaler; Melinda (Greg) Eudy; Amanda (Tyson) Spradlin; Michael Guy Martinek; Lance Cpl. Brandon Guy and Anneli Martinek; Dru and Klay Paspuletti; and a great-grandson, Parker Eudy. He was preceded in death by his brother Robert Martinek. Richard‚Äôs Funeral Service will be held at 10:30 a.m., on Saturday, August 4, 2001 at ST. BERNARD CATHOLIC CHURCH, 1617 West Pine Street, Appleton. Friends will be received at the funeral home on Friday, August 3, from 4 until 8 p.m., and again at the church on Saturday from 9:30 a.m. until the time of service. A Prayer and Scripture Service will be held at 7:30 p.m. on Friday, August 3. In lieu of flowers, a memorial fund has been established to benefit the Arthritis Foundation. The family would like to thank the staff of The Heritage and Dr. Mary Stastney, for their care of Richard.