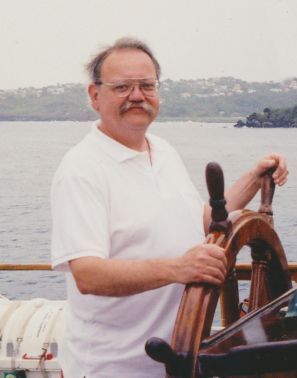 Richard J. Oberweiser, age 64, passed away Wednesday afternoon, January 7, 2015 with his loving wife Susan by his side. He was born in Appleton on August 23, 1950 to the late James and Margaret (Rutter) Oberweiser.

Dick worked many long hours as a manager in the bar/restaurant and banquet establishments throughout the Fox Valley, including Alex's Crown, The Pioneer Resort and The Valley Inn in Neenah.

Dick loved sailboats. All kinds, all sizes. His favorite summer past-time was sailing around Lake Winnebago with his son Charlie in his 16 foot Compact. Some of his favorite sailing adventures were a Barefoot Caribbean Cruise and the two months he spent as a working crew member on a replica of Christopher Columbus's ship, the Niña.

He loved gardening and had a very large vegetable garden. He also enjoyed cooking and finding new recipes for the vegetables he harvested, the fish he caught, and the deer and game he hunted.

Dick met his wife Susan Erm at a ballroom dance class and they were united in marriage on June 11, 2003.