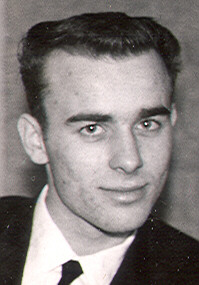 Age 67, of Appleton, died Friday, August 22, 2008, at his home.
Dick was born August 26, 1940, in Grand Chute, the son of Floyd and Grace (Peterson) DeLain. He grew up in Appleton, and was a 1958 graduate of Appleton High School.
Following graduation, Dick became an apprentice electrician with DeLain Electric, a company operated by his grandfather. He served as a journeyman with Merkes Electric, and later received his master electrician license and began his career with Buss Electric Company. Dick was with Buss for 25 years, retiring in 1995.
Dick was an avid Miami Dolphins football fan, and was a previous season ticket holder for the Packers. Dick will be truly missed by his many friends at the Camelot.

Funeral services for Dick will be at 11:00 a.m. Thursday, August 28, 2008, at the WICHMANN FUNERAL HOME, downtown chapel, with Rev. Bruce Pangborn, Our Saviour's Lutheran Church ELCA officiating. He will be laid to rest at the Ellington Union Cemetery, Stephensville. Visitation will begin at 9:00 a.m. Thursday at the funeral home until the hour of services.