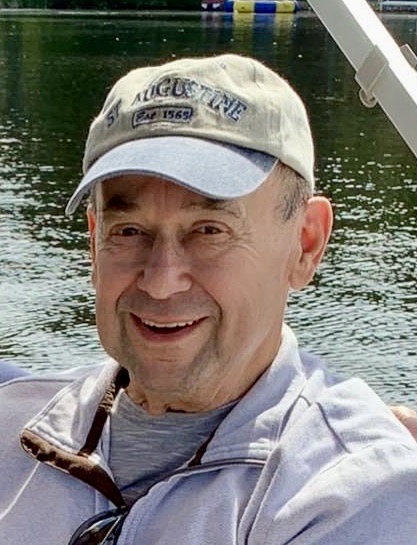 Richard "Dick" Voelzke
October 29, 1948 - October 11, 2020
Print
Email
Service
You may view Dick's service by clicking here.
Location Not Available
Service will be streamed to this page at the below link

The son of the late Richard and Caroline “Charlotte” (Schatz) Voelzke, Dick was born in Oshkosh, WI on October 29, 1948.

On August 30, 1969 (two weeks after returning from Vietnam), Dick married the love of his life, Elizabeth Calo at St. Mary’s Catholic Church in Oshkosh, WI. It was one of the hottest days of the year, and Liz and Dick frequently laughed that they didn’t know if Dick’s perspiration during the ceremony was from the heat or his nerves. From their honeymoon in Borth, WI to trips around the world, their life was an adventure from the very beginning.

Dick was especially proud of his daughter, Nicole (Nikki) and they would talk for hours about everything from life to business to politics. Nikki and her dad had a very special bond. She deeply appreciated her dad’s advice and guidance and will miss their talks and his reminders to “drive safe, check the parking lot and lock the doors”.

Dick worked at SECURA Insurance Companies as Regional Vice President until his retirement in 2008. Dick was famous for many things at SECURA, the funniest of which was the “Beef Roast Incident” – an incident that SECURA still uses to illustrate the robust coverage of their auto insurance products after a forgotten beef roast was left for weeks resulting in a totaled car.

Dick’s whole life was a matter of urgency that he, his wife and daughter referred to as “Voelzke speed”. Make a decision and get it done. Whether in business or in life, even at the end, Dick was all about “Voelzke speed”. His laugh was the loudest and most full of life and you could always find him in a crowded room by just listening for his unique laugh.  He was dedicated to his wife and daughter and the three of them were truly a unit. Where one went, the other two followed. It was a wild ride at times, but his passion for everything he did always brought people along for the ride.

He was a truly dedicated Packers fan whether they had a good season or a bad one. He had fond memories of attending the 1967 NFL Championship Game (aka the “Ice Bowl”) between the Packers and the Cowboys with his dad and uncle. His favorite quarterback is and always will be Brett Favre and was tongue-tied when he had the honor of meeting Bart Starr.

In 2009, he was able to achieve one of his lifelong dreams to live by the lake where he enjoyed fishing with his best friend, Herb Ilk. Dick and Herb would have everyone in stitches when they shared tales of their fishing trips over the years. He loved hosting friends and family for outdoor gatherings.

Dick was proud to serve his country in the United States Army. He did a tour of duty in Vietnam, served stateside in Virginia, and finished his service in Germany. After attending boot camp in Fort Gordon, GA, he served as an MP in Vietnam and ended his service as a Personnel Specialist. While in Vietnam, Dick also served in the role as Santa Claus for children in the orphanage in Saigon which even made the newspaper in Texas. He was awarded the following medals: National Defense Service, Vietnam Service, Vietnam Campaign, Army Commendation, and Good Conduct Medals. Dick was scheduled to go on the Old Glory Honor Flight in April to visit the Vietnam War Memorial in Washington D.C., but was unable to go due to the COVID-19 pandemic.

Due to COVID-19 and health concerns, a private funeral will be held. Everyone is invited to watch the livestreamed service on Wichmann Funeral Homes’ website (wichmannfuneralhomes.com) on Tuesday, October 20 at 11:15 a.m.

Liz and Nikki are grateful to Dr. Cherian, Dr. Freeman and the ICU nurses and staff, especially Aleigha, Joel and Lisa (CNA) at St. Elizabeth’s Hospital.

Dick will be immensely missed by all who knew and loved him.