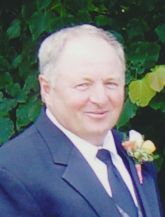 Dick was born on March 15, 1947 to Clarence and Helen (VanDerlois) Gosz in Appleton. On May 14, 1976, he was married to Mona Pingel at St. Thomas More Catholic Church. He was a veteran having served the US Army in Vietnam. He worked at Miron construction for over 40 years. Dick had a passion for cars and he enjoyed attending local car shows. He drove race car #66 at the Wisconsin International Raceway when he was younger. He was a member of the Corvette Club. His greatest love was his grandchildren and the times they spent together will always be treasured. He also enjoyed going out to lunch with his close friends. Dick was a member of St. Thomas More Catholic Church.

Dick was preceded in death by his parents, his beloved wife Mona, and a brother James Paul Gosz.

The funeral liturgy for Richard will be held at 11:00 a.m. on Monday, June 17, 2013, at ST. THOMAS MORE CATHOLIC CHURCH, 1810 N. McDonald Street, Appleton, with Fr. Gerald Falk officiating. Friends may call on Monday at the church from 9:0 0 a.m. until the time of the mass. Interment will follow at Riverside Cemetery, Appleton.