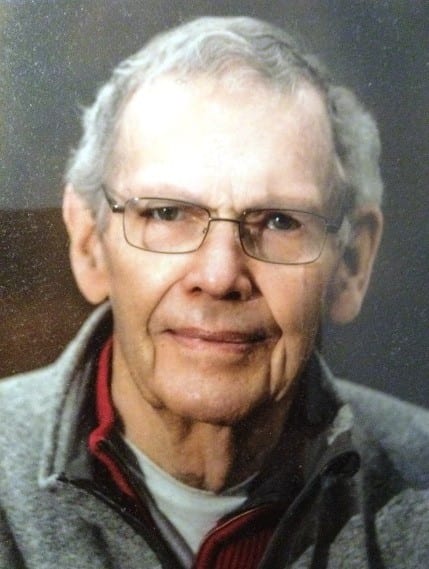 Richard A. Buran, 84, passed away peacefully on December 14, 2020, at Peabody Manor where he’d been living for two years after suffering a stroke.

Dick grew up in Menominee, Wisconsin, the son of Rev. John and Dorothy Buran.  He was captain of his high school football team and became an Eagle Scout.  He graduated from Carroll College where he met and married his college sweetheart, Helen Thiele, and they spent the next three years in the US Army, where they were delighted to live in southern Germany.  They traveled extensively, and their first son, Mark, was born in Munich.

Dick dedicated over 35 years to a career in sales, and the family made several moves around the midwest, finally settling in Appleton.

His love of people brought him a myriad of friends throughout his lifetime.  He was a kind, gracious, giving man, with great wit.

Classical music played in the background throughout Dick’s life.  On New Years Day, Strauss’ loud Radetzky March always brought laughter, remembering a special time in Germany.  He was a lifetime member of the McDowell Chorus, singing joyfully with his “Hail Friends of Music.”  He was also a long-time member of the Congregational Church choir, under the direction of Mary Kay Easty.

For over 35 years he was a member of the Fox Cities Kiwanis, and was the recipient of the prestigious Hixon Award.  He cherished the warm relationships he had with his Kiwanis family.

Dick donated over 70 pints of blood to the Community Blood Center, and was glad to be able to help people in need of transfusions.  He also gave time each week volunteering at the Homeless Connection and the Paper Discovery Center.

He exercised at the Y almost every day after moving to Appleton, played racket ball, and enjoyed spending time with all of his friends there.  He loved the Milwaukee Brewers, the Wisconsin Badgers, and most of all, the Green Bay Packers.  He told stories about attending the Ice Bowl in 1967.

Dick was devoted to his three sons, Mark, Gregg, and AJ, delighting in all of their events and accomplishments, always proudly cheering them on as they became men.  His favorite part of life was spending time with his family, attending the boys’ games and swim meets, camping, teaching them skills that gave them confidence and security in their lives, and just hanging out together.  They loved their Dad’s sense of humor!

Helen and Dick travelled to Puerto Vallarta, Mexico, for 15 winters, happily enjoying all the friends and adventures they had there, while relaxing at beautiful Casa Andrea and exploring the surrounding areas.

Besides his parents, Dick was preceded in death by his brother David Buran and his brother-in-law, Arthur Holden Thiele.  Nothing made him happier than to be with his family and he will be deeply missed by Helen, his wife of 62 years, 3 sons, Mark (Karen), Gregg (Sari), AJ (Krin), grandchildren Hop, Elizabeth, Holly and Jack, sisters-in-law Ann Buran and Helen Thiele, nieces, nephews, cousins, step-grandchildren and many wonderful friends.

Due to Covid, the family will celebrate Dick’s life privately.

A very special thank you to each person who touched our lives so positively at Peabody.  You made Dick’s time there a happy one. He truly loved each of you, and our family is grateful for your extraordinary kindness and care.

When we get to the end of our lives together,

the house we had,

the cars we drove,

the things we possessed,

What will matter is that

and you had me.