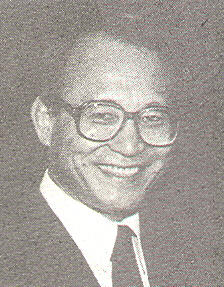 Zi Hyung Sa, retired United Methodist Pastor, passed away at St. Paul Elder Services in Kaukauna, WI on Thanksgiving Day, November 27, 2008. During his life and in recent years, although he faced struggles of his own, he was always grateful to everyone who shaped his decisions and his life. His wife, Moon, shared in his life's ministry, raised a family with him, and was his devoted caretaker and companion in his final years.

Those who knew Zi knew his love of music and how integral it was to his ministry. Many in this area might remember when he began teaching high school music and Spanish in 1964 in Luxemburg, Appleton, and Neenah. He went on to charter the Korean United Methodist Church (UMC) in Kenosha, which was the first Korean United Methodist Church in Wisconsin. He chartered three more churches: the First Korean UMC in Milwaukee; the Korean-American Zion UMC in Green Bay (which is now The Korean Zion UMC of Appleton); and Clovis Korean UMC in New Mexico. He also pastored at Peace UMC and Zion UMC, both of Green Bay.

Pastor Sa brought to his ministry his love of music and a rich heritage. He was born in Manchuria on November 17, 1928, the son of the late Tai Hyun Sa and Ai Wul Giim. After the Korean War, his parents started a home for orphaned children, which is still in operation today. Over the years he taught and mentored hundreds of children. He went on to earn a teaching certificate from the Seoul National University of Korea, and came to the United States in 1956 to study music. He graduated from Lawrence University in 1960 with a Bachelor's degree in Music Education, and in 1962 received his Master's degree from Northwestern University. His love of music was then brought into his studies at Garrett Theological Seminary where he received his Master of Divinity degree in 1979.

He will be remembered for his beautiful tenor voice, and his love of children, opera, photography, camping, canoeing, and teaching Tae Kwon Do as a blackbelt.

He is survived by his loving wife: Moon Ja Sa of Appleton; his daughter Soozung Sa Rankin, son-in-law, Brian A. Rankin, and grandson, Robert Zi Allen Rankin of Philadelphia; and his daughter, Miraan (Mimi) Sa, and her fiancé, Philippe Denis, of San Francisco. He is also survived by his sister, Zi Sook Sa of AnYang, South Korea, and her four children, Zi's nieces and nephew.

Memorial Services for Zi Hyung Sa will be held at 4:00 PM on Saturday, December 6, 2008 at the KOREAN ZION UNITED METHODIST CHURCH of Appleton, W2914 Pogrant Road in Little Chute where Rev. ChungNam Kwak is the pastor. The Rev. Raymond Kotwicki will officiate at the memorial service. The family will receive guests at the church on Saturday beginning at 3:00 PM, and again after the service has concluded.

Zi often said, “If you want to do something, do it and make it happen; a thousand mile journey even starts with one step.”

If you wish to make a donation in memory of Zi, gifts may be sent to the Appleton Zion United Methodist Church, or to Lawrence University for scholarships.