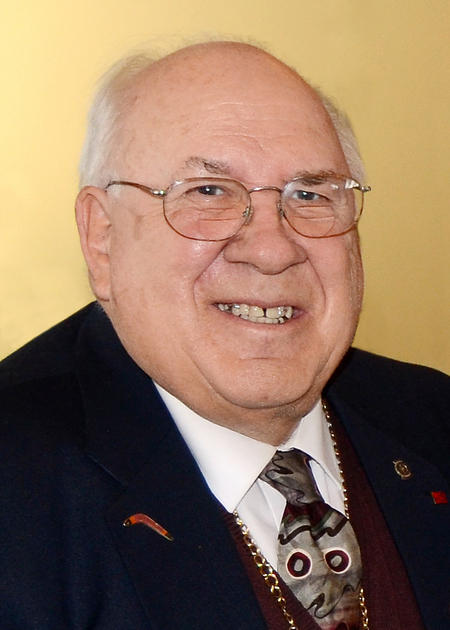 Rev. Harvey Kandler, age 80, of Kaukauna, passed away on Tuesday, January 7, 2014. He was born on August 13, 1933, in the Town of Chilton, the son of the late Louis and Laura (Awe) Kandler. After attending Chilton Public Schools he graduated from Lakeland College and Mission House Seminary with B.A. and B.D. degrees. On June 1, 1957, he married Nancy Lee Hummitzsch in Sheboygan. Harvey had a summer internship in Buffalo and Tonawanda, New York and was ordained in his home church on June 15, 1958. He served at the following United Church of Christ churches; St. John's in Western, Nebraska, First Congregational and Community in Eagle River and St. Germain, and retired from Immanuel in Kaukauna in 2001. Harvey was active in pulpit supply after retirement for thirteen years when needed in numerous congregations.
Harvey was involved with many church camping activities at Moon Beach Camp in St. Germain, High Cliff Camp and Calumet County Park. He served on numerous Conference/Association committees. Harvey was an icon in the community and was involved with the Ecumenical Men's and Women's Prayer Breakfast, Heart of the Valley Clergy Association, Boy Scout Troops, and UNICEF Campaign leader. In the Kaukauna community he was one of the founders for Round House Manor, and active in Rotary International and the Kaukauna Historical Committee. Harvey was a volunteer night chaplain for St. Elizabeth Hospital and assisted with ministry at the jail in Outagamie County. He was an advisor/sponsor with the Hmong and Bosnian families.
Harvey and Nancy led 21 tours overseas. He was on numerous boards at Lakeland College, the Union-Kelso Cemetery, and Pied Piper Pre-School. He has always enjoyed classical music, youth work, baseball, flower gardening, and photography. Harvey was a pillar of the community and will be missed by many.
Harvey is survived by his loving wife of 56 years, Nancy Kandler; son: Craig (Kristi) Kandler of Darboy; daughters: Cindy (Scott) Wharton of Fairfax, Virginia; Kim Kandler and Kris Kandler both of Neenah; grandchildren: Collin Kandler; Angela, Alexander and Annette Wharton; brothers-in-law, Harold Neuhaus of Chilton and Dennis (Bonnie) Hummitzsch of International Falls, Minnesota; sister-in-law: Peggy (DuWayne) Nohl of Sheboygan Falls; and mother-in-law, Sally Hummitzsch. He is further survived by nieces, nephews, other relatives, many colleagues and friends. Harvey was preceded in death by his sister, Florence Neuhaus and father-in-law, Carl J. Hummitzsch.
The funeral service for Rev. Harvey will be held at 4:00 pm on Sunday, January 12, 2014 at FIRST CONGREGATIONAL UNITED CHURCH OF CHRIST. Rev. Stephen P. Savides and Rev. Jane B. Anderson will be officiating. Interment will take place at Union Cemetery in Kaukauna. The family will receive relatives and friends at the church on Sunday from 1:30 pm until 3:45 pm. In lieu of flowers, memorials to First Congregational United Church of Christ in Appleton, Lakeland College in Sheboygan, or Moon Beach Camp in St. Germain are appreciated. Online condolences can be offered at www.wichmannfargo.com.
The Kandler family would like to extend a sincere thank you to the staff at St. Paul Elder Services and the ICU unit at Appleton Medical Center. A special thank you to the Pastoral staff at First Congregational United Church of Christ, and all of our friends and relatives for your constant prayers.