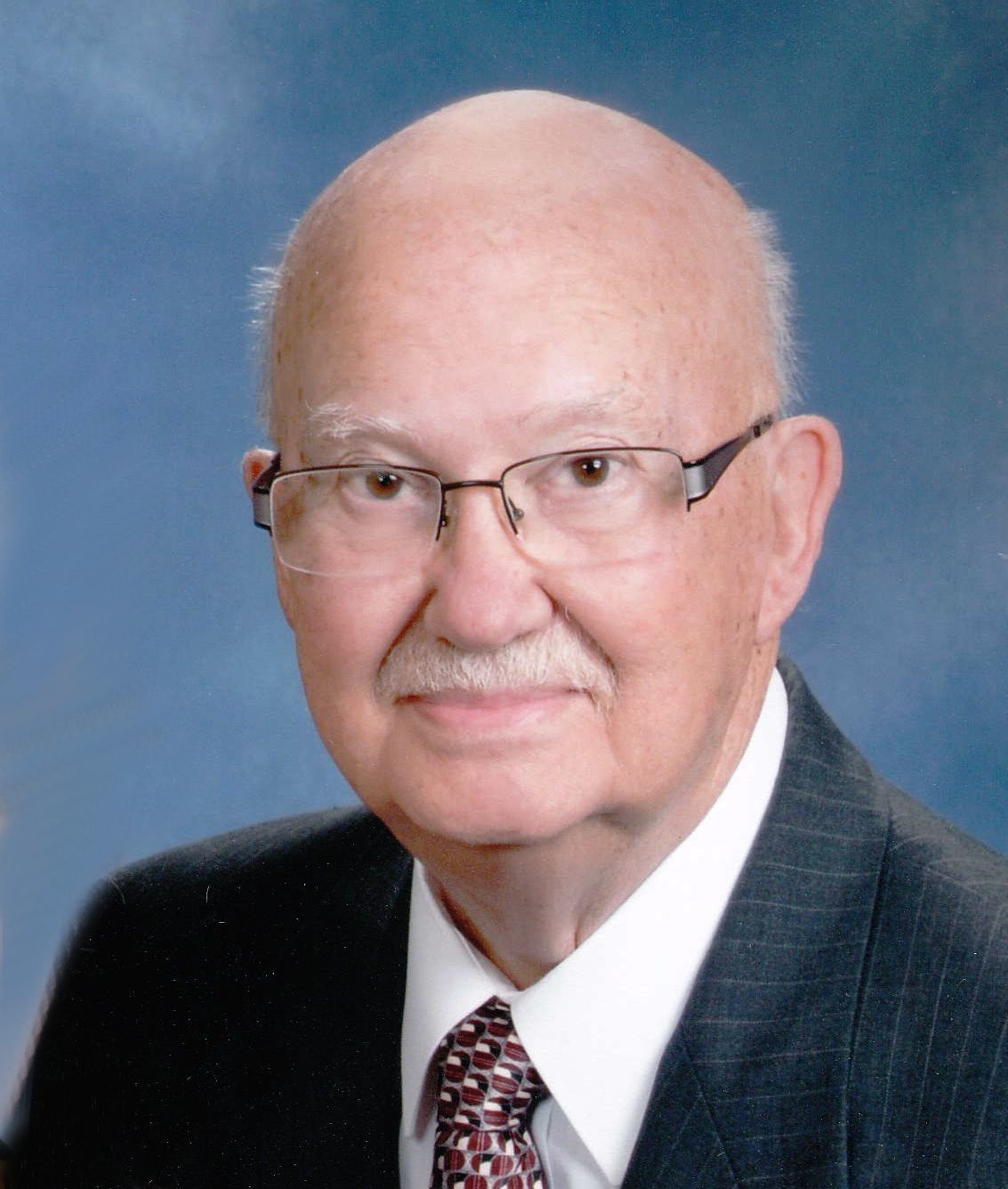 Blessed by God, Rev. Harold Alvin Essmann departed this life for his eternal home in heaven on October 10, 2016. Harold was born September 20, 1930, in St. Charles, Minnesota, the oldest son of Alvin Paul Essmann and his wife Sadie Johanna (Rusert) Essmann. He received Holy Baptism in St. John Ev. Lutheran Church, Lewiston, Minnesota, on October 12, 1930. He was confirmed in the same church on April 3, 1943.

Pastor Essmann attended St. John Ev. Lutheran School for his elementary education and graduated from Lewiston High School in l948. For two years he attended Winona State University before attending Concordia Theological Seminary in Springfield, Illinois, where he graduated on June 1, 1956. On June 9, 1956, he was united in holy wedlock with Ruth Rose Lawrenz at St. Matthew Ev. Lutheran Church in Winona, Minnesota.

During his ministry he helped supervise a number of building programs including a new parsonage in Fountain City as well as an addition to St. Michael's Lutheran Home for the Aging of which he was administrator. At St. John congregation in Waterloo a large addition to the Lutheran school was undertaken in 1976 and a new church building in 1983.

Pastor Essmann's ministry was filled with many firsts. He was a founder and the first pastoral advisor of the National Lutheran Women's Missionary Society of the Wisconsin Ev. Lutheran Synod. He was appointed the first chairman of the Executive Committee for Latin America, a position he held for 24 years and later was appointed to the Committee for Mission Expansion of the Board for World Missions where he served for 12 years. He founded the Multi-Language Publications program of the Board for World Missions of the synod in 1996 and served as its first coordinator and later as a member of the Multi-Language Publications Committee. After serving on the Committee for Mission Expansion, he was asked to serve as the first Coordinator for mission outreach in Pakistan and Nepal and later as the Coordinator for literature in these same two countries.

Various publications were authored by Pastor Essmann. He wrote a book entitled, THEY LIVED ON ANOTHER PLANET, explaining the mission exploration of Russia, Bulgaria, and Albania that resulted in mission activities in those countries. Working with Multi-Language Publications he wrote two books to improve English entitled THE LIFE OF CHRIST ACCORDING TO THE GOSPEL OF MARK as well as a booklet WHAT THE BIBLE AND LUTHERANS TEACH that is translated into 20 languages with over 250, 000 copies printed and THE PROMISE, a booklet used extensively around the world as an evangelism tool. THE PROMISE is translated into 44 languages and over 600, 000 printed. Over the years a number of meditations were written by Pastor Essmann and published in Northwestern Publishing House's booklet MEDITATIONS. Guided self-study books used in the Bible Teaching Series in a number of languages were written by Pastor Essmann and include: THE GOSPEL OF JOHN, THE LETTER TO THE ROMANS, THE MEANS OF GRACE, THE CHRISTIAN CHURCH and PARABLES OF JESUS as well as I AM BLESSED THROUGH GOD'S WORD.

These activities are not listed pridefully, but in thanks to God for the gifts and opportunities provided by a gracious God and carried out in response to the love of Christ.

He is survived by his wife, Ruth, to whom he has been married for 60 years; and two children: Rhoda (Rev. Dennis) Belter and Michele (Reg) Pfeifer, both of Appleton. Seven grandchildren also survive, Rev. Jeremy (Kelsey) Belter of Plano, Texas; Nicole (Jared) Dorn of Appleton; Zachary Belter of Rochester, Minnesota; Amy (William) Pavlakos of Sterling Heights, Michigan; Jillian (Keith) Huot of Macomb, Michigan; Kirsten (Joshua) Schwartz of Antigo, Wisconsin; and Emily Pfeifer (special friend Ben Zehner) of Appleton. He is survived by four great-grandchildren, one great grandchild on the way, and three step-great grandchildren as well as nieces and nephews. Also surviving is one brother: Lloyd Essmann of Madison, Wisconsin, two sisters-in-law, and one brother-in-law. He has been preceded in death by his parents; a son, David Harold Essmann; one brother, Wayne Essmann; and a sister, Phyllis Kaump.

The Christian funeral will be held at 11:30 AM on Saturday, October 15, 2016, at Riverview Ev. Lutheran Church, 136 West Seymour Street in Appleton, Wisconsin. Rev. Dennis Belter and Rev. Adam Bode will be officiating. Pastor Essmann's mortal remains will await the resurrection of all people at Highland Memorial Park. Visitation will take place at the church on Friday from 4:00 PM until 7:00 PM and also on Saturday from 9:00 AM until the service time.

In lieu of flowers, memorials may be directed to the WELS Multi-Language Publications, or WELS World Missions to facilitate the building of churches in Nepal and Pakistan.

“After this I looked and there before me was a great multitude that no one could count, from every nation, tribe, people and language, standing before the throne and in front of the Lamb” Revelation 7:9.