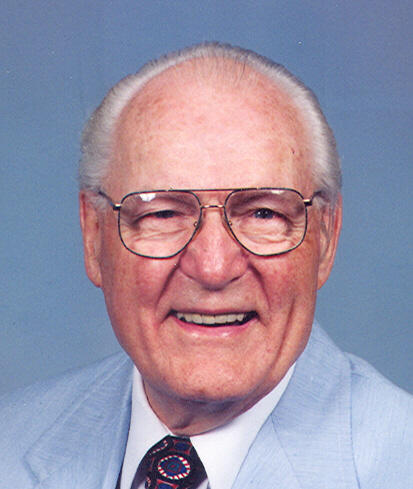 The Rev. Lorman M. Petersen, age 93, passed into the Lord's eternal care on Saturday morning, July 11, 2009 at Cherry Meadows Hospice in Appleton. He was born on December 1, 1915, in Avon, South Dakota, son of the late Jedokes and Florence (Perrett) Petersen. He received his early Christian training and was baptized and confirmed at Zion Ev. Lutheran Church in Avon.

Rev. Petersen was a Lutheran pastor, professor of theology, and seminary dean. He served parishes in Pekin and Peoria, Illinois from 1943 until 1949, and for twenty-five years was professor and Academic Dean at Concordia Seminary in Springfield, Illinois. His last call was to serve the faithful at Faith Lutheran Church in Appleton from 1975 until 1983. After his retirement, he and Adele divided their time between their home in Austin, Texas and their summer place in the north woods of Wisconsin, near Phelps. Following Adele's death in 1993, Lorman moved to Appleton and took up residency at The Heritage. He very much enjoyed his many years there, as well as the many wonderful people who befriended him. He continued to teach, write, and serve the church in his retirement.

Rev. Petersen was a graduate of Concordia Academy and College in St. Paul, Minnesota as well as a 1940 graduate of Concordia Seminary in St. Louis, Missouri. He earned his Master's and Doctor's degrees in Greek and New Testament literature and theology. He also studied at the University Of Chicago Divinity School, the University of Illinois, the American Classical School of Athens, Greece, and the Albright Institute of Archaeology in Jerusalem. Lorman also served on various commissions and committees of the Lutheran Church – Missouri Synod. One was the synod's Board of World Missions on which he served for over twenty years and traveled extensively visiting the mission fields. While at the seminary, he was a member of the Accreditation Commission of the American Association of Theological Schools. In Appleton, he was a member of the Winnebago Health Systems Board, the Hospital Pastoral Care Board, and the board of a half-way house, and was a volunteer hospital chaplain.

In 1991, Rev. Petersen was voted the national gold medal award by the Religious Heritage Society of America for his fifty years of service in the ministry and his contribution to the religious ideals and values of America.

He was made Pastor Emeritus of his last congregation, Faith Lutheran Church, in September of 1993.

A funeral service of praise and thanksgiving will be held at 11:00 AM on Wednesday, July 15, 2009 at FAITH LUTHERAN CHURCH, 601 E. Glendale Avenue in Appleton, with Rev. Daniel Thews and Rev. Paul Brinkman officiating. Interment will be in Highland Memorial Park. Friends may call at the church on Wednesday morning from 9:00 AM until the hour of the service. A memorial fund is being estabilshed for the Endowment Fund at Faith Lutheran Church in Appleton.