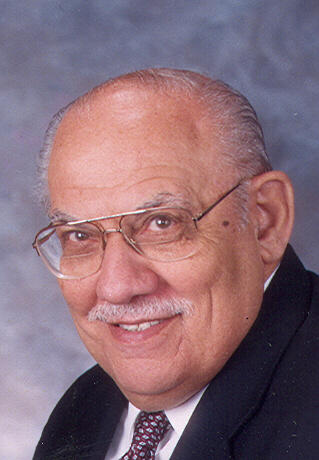 On Friday, May 23, 2008 Rev. Daniel Benjamin Spina left this life and began his eternal life with the Lord Jesus Christ. He died after a long battle with cancer. Daniel served his nation in World War II as Seaman 1st class, a member of the Navy Seabees from 1944 until 1946.

Rev. Daniel Spina lived a life of service to God and to those around him as an ordained Assemblies of God minister for 53 years. Rev. Spina began his ministry in Howard Beach, NY. The church began with a children's story hour run by his wife, Beth. Daniel, in time, held bible studies for their parents. He then moved to Warsaw, NY for two years and on to Ripon, Wisconsin where he pastored for six years. Moving to Marinette, Wisconsin in May of 1962 and then to Appleton on January 1, 1968, he retired from full time ministry in January of 1993.

Throughout his years in Wisconsin, Rev. Daniel Spina expanded his ministry in each community to include radio programs entitled “Melodies of Praise” and “Thoughts From the Word”.

While in Appleton, he served as chairman of the Fox Valley Evangelical Pastors Association and was a member of the Evangel Ministries Board. He held a bible study question and answer time at St. Bernard Catholic Church for 13 years and rode with the Appleton Police Department as chaplain. Daniel met with Lawrence University students and staff for bible study on Tuesday evenings at the Neuman Center. He served the Wisconsin Northern Michigan District as Sectional Presbyter, Presbyter, and nationally as Executive Presbyter. He was a member of the Youth Camp Committee and finished his District service as Assistant District Superintendent in the spring of 2004.

Funeral services for Rev. Daniel Spina will be held at 1:00 pm on Tuesday, May 27, 2008 at PATHWAYS CHURCH, 311 W. Evergreen Drive in Appleton with Revs. Harley Olson and Michael Randerson officiating. Burial will take place at Spencer Lake Memorial Park, Waupaca. Visitation at the CHURCH will be Monday, May 26th from 4:00 – 8:00 p.m. and Tuesday from 12:00 noon until the time of service. A memorial fund has been established in his name.