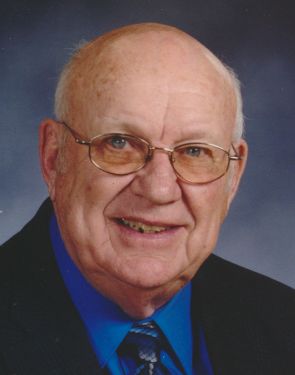 Burton Stensberg, age 88 of Appleton, was called safely home to the waiting arms of his Savior on Wednesday morning, February 27, 2019, following a year-long struggle with failing health. Burt was born in Wisconsin Rapids on July 8, 1930, son of the late Olaf and Roena (Kruger) Stensberg. On August 31, 1958, he married Lucille Lange and together the couple was blessed with sixty years of marriage and two children.

Pastor Stensberg was a graduate of Lincoln High School in Wisconsin Rapids, attended Valparaiso University in Indiana and Concordia Seminary in Illinois, and graduated from Wisconsin Lutheran Seminary in Mequon, Wisconsin. He was proud to have served his country in the United States Air Force from 1950 until 1954 in the chaplain’s office in England. He was awarded the Good Conduct Medal as well as the National Defense Medal.

For over thirty years, he served at St. Peter Lutheran Church in Schofield, and in retirement has assisted at Mount Olive Lutheran in Appleton. In his earlier years, he served the faithful at congregations in West St. Paul and St. Paul, Minnesota, and later in Hamburg, and Merrill, Wisconsin. Pastor Stensberg was appointed to serve in many offices of the church districts, including chairmanship of the Evangelism Committee for the Western Wisconsin District and the Wisconsin River Valley Conference, where he was also well-known as a Vacancy Pastor for many churches.

He enjoyed gardening, fishing, camping, and reading. He and Lucille had also traveled throughout the United States and extensively in Europe, especially in Germany.

He is survived by his wife: Lucille Stensberg of Appleton; two children: Joel (LuAnn) Stensberg and Julie (Michael) Gaulke, both of Appleton; five grandchildren: Christopher, Ryan, Lydia, Siri, and Erika; and a sister: Donna Stensberg of Wisconsin Rapids. He was preceded in death by his parents, brothers Robert, Kenneth, Richard “Butch”, and Russel, two nephews, and two nieces.

The Christian Funeral for Pastor Stensberg will be held at 3:00 PM on Sunday, March 3, 2019 at Mount Olive Lutheran Church, 930 E. Florida Avenue in Appleton, with Rev. Robert Raasch officiating. Interment will take place at a later date at Restlawn Cemetery in Wisconsin Rapids. Family and friends are invited to gather at the church on Sunday, March 3, from 1:00 PM until the hour of the service.