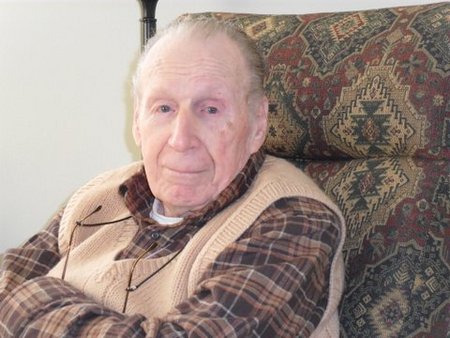 Raymond William Morrison (96) died peacefully with family by his side on Friday November 16, 2012 at the Grand Horizons Community Based Residential Facility in Kimberly, WI. Raymond succumbed to a long battle with Alzheimer's disease.

Raymond was born December 24, 1915 to parents Anna (Forbes) and James Morrison of Keosauqua, Iowa. He attended schools in Van Buren County, graduating from high school in 1933. He attended Iowa State University and Minnesota State where he earned a Master's Degree in Dairy Science before being called to active military duty in 1941. Raymond served in Europe, fighting in the battle of the bulge, from September 1944 to June, 1945. He went on to serve a total of 30 years as a reservist, retiring as a full colonel in 1970.

Raymond married Carolyn Pope in December 1941, having met his college sweetheart while attending Iowa State. The couple had three children, Guy James (deceased), Anne Martha (Portage Michigan) and Mark Alan (Karen – Combined Locks, WI) and were married for 67 years. During Raymond's working years with Kraft Foods and Sealtest Dairy the couple resided in New York, Chicago, Milwaukee and finally Philadelphia. In 1980 Raymond retired and moved to his home State of Iowa to be close to family. He and Carolyn resided in Cresco, serving the community through many volunteer activities for 27 years. As Raymond and Carolyn's needs changed, they moved to Wisconsin in 2007 to be closer to his son and daughter in law Mark and Karen Morrison. Carolyn died in December 2009.

While Raymond served as a corporate professional for many years, he remained a son of the Iowa soil throughout his life. He was ultimately practical in his lifestyle and outlook, and forever dutiful to his community, country and family. He embodied the very best of those in 'the greatest generation' and he will be sorely missed by his family.

Thememorial service for both Raymond and Carolyn Morrison will be held on Saturday December 8, 2012 at 10:30 am at the United Methodist Church in Keosaukua Iowa. The Reverend Douglas Harding will officiate. Donations can be made in his name to Alzheimer's Association of America. Send a check or money order payable to the Alzheimer's Foundation of America, 322 Eighth Ave., 7th fl., New York, NY 10001.