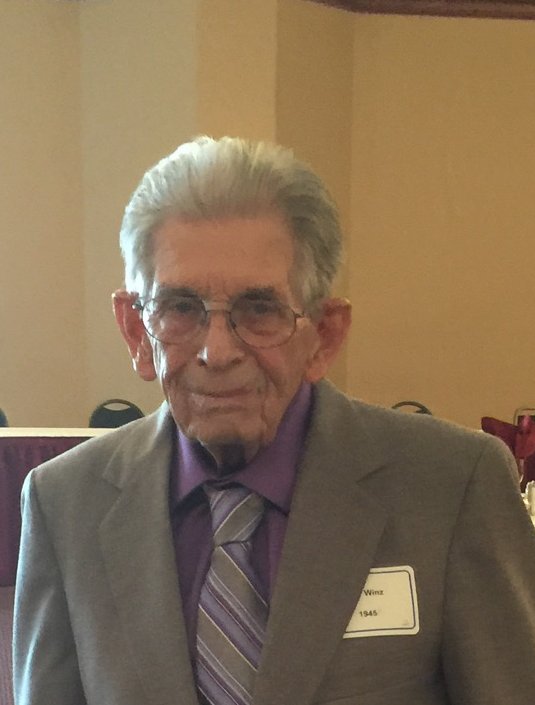 Raymond S. Winz, 93, passed away peacefully on Sunday, September 30, 2018, with his family by his side at Rennes Health and Rehabilitation, Appleton.

“What a beautiful day” Ray, as he often responded, and also upon meeting his Lord and being reunited with his wife Joyce, the love of his life, on Sunday, September 30, 2018.

First born of two children to Sylvester and Dorothy (Apitz) Winz on July 23,1925. Lifetime resident of Menasha. Ray grew up with his brother James. Typical boys-fishing and swimming in Lake Winnebago, occasionally stealing pies cooling on their aunt’s window sill. Later helping and working at the families historic Winz Brewery next to the water tower. Ray was on the track team in high school and later loved and played the game of golf, which once he had a hole in one.

Leaving high school early to service his country and joined the Navy, his only sibling joined as well. He then trained at the Great Lakes Naval facility in Illinois. Ray was deployed in the Atlantic and Pacific Theaters and received commendation medals for the Philippine Liberation and Victory medal during World War II. At the end of WWII, Ray and the ship he served on, the Destroyer USS Gunason, were in Tokyo Bay, Japan, among the American fleet of vessels or warships to witness Japan’s signing of the surrender of WWII, on the Battleship USS Missouri, on September 2, 1945. Extremely proud of his military service, Ray would enjoy talking about his Navy war experiences to anyone willing to listen.

Returning home from the war, Ray met his gal Joyce Green and she became his bride and were married on August 20, 1949, at St. Mary Catholic Church, with the reception at Germania Hall, both in Menasha. Ray and Joyce often enjoyed dancing from swing and big band music to Polkas. They were great dance partners. Ray faithfully cared for his wife during her illness of 10 years until her passing in 2006.

In 1951 their Daughter Bonnie was born. There was no greater father-daughter bond than Ray and his daughter Bonnie. She lovingly cared for her Father for the last 12 years, allowing his final wishes to stay in his home to be fulfilled.

In 2015, Ray was an honorary Parade Marshall for the Neenah-Menasha Memorial Day Parade. While vacationing in Florida, Ray was honored for his services at a dance.

Ray was friendly, outgoing, very personable, well liked, pleasant to be around, and always in a good mood. He would often make one laugh by telling jokes or singing funny songs. Ray knew a lot of people through sales and in comparison, could have been your favorite bartender. He was always willing to help or give a hand in times of need. If you were fortunate enough to know Ray, you probably would have become good friends. Ray lived a long, full and happy life. He will be missed and thought of always for his happiness and friendship.

Dad, we will always cherish and remember our yearly vacations together to Florida and Hawaii. Going to Door County, Packer Hall of Fame and stadium tour, Pearl Harbor Arizona Memorial. Dad was a longtime member of the Neenah-Menasha Elks Lodge #676. He also enjoyed time at the Menasha Grill and his daily breakfast with the coffee group at Third Street Diner. I’m sure you and Mom will start a coffee or dance group where you are.

Ray was preceded in death by his wife; parents; a brother: James (Dottie) Winz; father- and mother-in-law: Ted (Inez) Green.

Funeral services will be held at 11:00 am, on Saturday, October 6, 2018, at St. Mary Catholic Church, 528 Second St., Menasha, with Fr. Paul Paider officiating. Interment will be in St. Margaret Cemetery, Neenah. Visitation will be Saturday at the church from 9:00 am until the time of the Mass.

Bonnie & Dan would like to thank the nurses at Rennes Health and Rehabilitation as well as the staff at Affinity Hospice for taking such wonderful care of Ray!

Memories are like stars in the dark of the night and his light will always shine on. Love you now and always will keep and treasure all our precious memories in my heart forever. Your Loving Daughter Bonnie