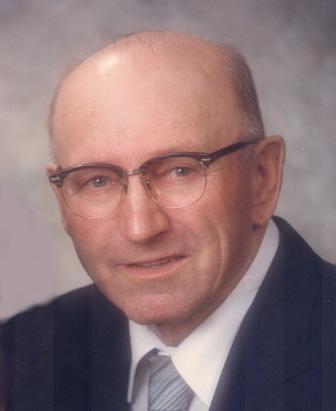 As a young man, Ray was an independent milk hauler in the Fox Valley area. He married Martha Van Handel at St John's Catholic Church in Little Chute, WI on
June 15, 1939. After selling the milk route in the 1940's, he briefly worked in construction until he began his employment at Consolidated Badger, Appleton, where he worked until 1979, retiring at the age of 62. Ray had many interests.
As a teenager, he exchanged part time work at the Outagamie Co airport for flying lessons. After earning his license, he worked part time to pay for the airplane rental to take his future wife on flying dates. He maintained his interest in flying by being a long time member of the EAA and attending the annual conventions. He was a volunteer fireman for the Grand Chute Fire Dept for 30 years and took this responsibility very seriously. In the 1970's, Ray and Martha purchased and built a cottage on Pelican Lake WI which would come to be his favorite place in the world. He was an avid hunter and fisherman. He was especially interested in musky fishing, deer and turkey hunting. He enjoyed these activities well into his eighties hunting with his sons and grandchildren. Ray was able to fix anything and was more than willing to help out anyone who requested his services. He was adept at construction, plumbing, electrical – and if he couldn't find a replacement part, he invented one. At the age of 80, he took up the sport of golfing which he enjoyed both on the course and viewing on TV. Other sports he was interested in was baseball, football, bull riding, bowling and horseshoes.

Funeral services for Ray will be held at 11:00 A.M. on Friday, August 29, 2008 at St. Thomas More Catholic Church (1810 N McDonald St.) with Father Gerald Falk officiating. Visitation will be held at Wichmann Funeral Home (537 North Superior St,) on Thursday, August 28, 2008 from 4 until 8 P.M. and again on Friday from 10A.M. until the time of Mass directly at church. Entombment will follow at Highland Memorial Park.

The family wishes to thank the RNs and CNAs at Manor Care Nursing Home for their special care of our father the last 2 years. We are grateful to Dr. Jack Meyer for his care and concern and to Father Gerald Falk for his many visits to dad in the nursing home. The family also extends a special thank you to nephew Ervin Woldt for his many visits and companionship – Dad really appreciated that.

Dad, we just can not believe that you are gone. You were such a fighter and so active that it seems impossible that you are not here with us. You have led a life that has influenced not only your children but all your relatives, young and old. We will miss you so much! -Your kids.

“God grant that I may live to fish until my dying day. And when my final cast is made I then most humbly pray – When in the Lord's safe landing net I'm peacefully asleep, Then in His mercy I be judged As good enough to keep.”
-Carol Fugate