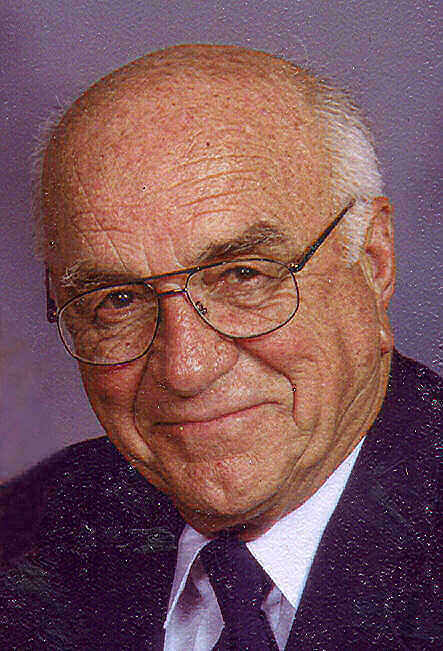 Ray Hooyman, of Appleton, age 86, passed away on April 23, 2009. He was born June 5, 1922 in Freedom, the son of the late Anton and Minnie (Vander Loop) Hooyman. Ray lived in the rural area west of the Village of Freedom. On May 10, 1947 he married Marian Van Heeswyk at Holy Name of Jesus Catholic Church in Kimberly.

After graduating from Freedom High School he took a position with Gloudemanns Department Store in Freedom. In 1942, he served in the U.S. Signal Corps during WWII. After his discharge, in 1946, he attended Business College while working at Kimberly Clark in the evening.

Ray possessed the vision and determination and the drive to see many of his dreams become a reality. His life's career was with Metropolitan Life Insurance Company, eventually leading from a sales representative to a sales manager. Ray was involved win veteran's activities from secretary to president of the Wisconsin Chapter of Metropolitan Life retirees. He was awarded the ECKER Award for all his achievements. After his retirement, he worked for an interval as a field representative on job placement for handicapped and disadvantaged individuals of Private Industry Council in Appleton.

Ray was a member of the Johnston-Blessman American Legion Post #38 and after going up the ranks he served as Commander. He was also a member of the Harvey Pierre Post #2778 – VFW of Appleton. Ray enjoyed over 40 years as a member of the Optimist Club of Appleton, serving as Lieutenant Governor of District 9. As a winter bird in Arizona, Ray loved helping organize the barbeque at the Sunshine Acres, a home for disadvantaged children.

Ray was a member of St. Therese Catholic Church and served as a Eucharistic minister in various churches wherever he lived. He loved to golf, fish and laugh with his many friends from Arizona, California or wherever he and Marian traveled.

The memorial service for Raymond will be held at 11:00 am on Tuesday, April 28, 2009 at ST. THERESE CATHOLIC CHURCH , Morrison Street at Wisconsin Avenue, Appleton with Fr. William Hoffman officiating. Full Military honors will follow the service at church. Inurnment will take place at Holy Name Catholic Cemetery, Kimberly. The family will receive relative and friends at the church on Tuesday from 9:30 am until the time of mass. Memorials to St. Therese Catholic Church are appreciated.