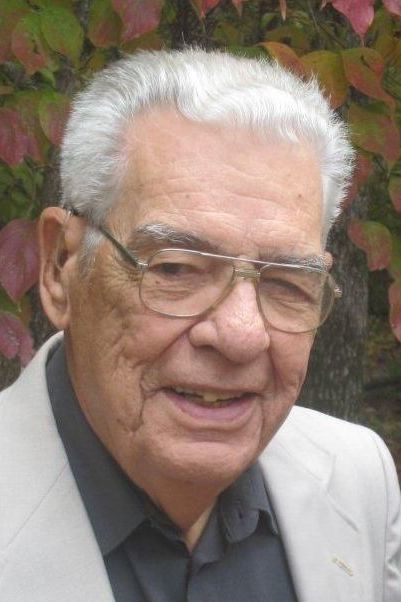 Ray H. Huntsinger, age 94, passed away on February 4, 2017 in Appleton, WI. Ray formerly lived in Glendale, WI and Hot Springs Village, AR for over 30 years each. He returned to Wisconsin in November 2015 and resided at the Appleton Retirement Community.

Ray was born on October 29, 1922 in Brewster, OH and was the oldest of three children born to his parents Ray Huntsinger and Georgia (nee Eagon) Huntsinger. After completing high school in Toledo, Ray enlisted in the United States Army Air Corps and served in WWII as a Flight Engineer in the 15th Air Force. On one of their missions his plane came under enemy fire and was heavily damaged to the point that it was extremely doubtful that the plane would be able to land. Through Ray's extraordinary efforts and resourcefulness in using makeshift materials he found on the plane, he was able to repair the plane to the point that it was able to land and the crew was saved. In 2003 he was finally awarded the Distinguished Flying Cross in recognition of his heroics on that fateful day in 1944. He was extremely humble and proud to receive this high honor.

Ray worked in Toledo, OH and later for A.O. Smith in Rochester, NY and Milwaukee, WI before beginning an extended career with Badger Meter in WI. His keen mind and high attention to detail were invaluable to his career in Quality Control and later in Sales. During his years in Glendale, he was active in community affairs, serving six years as a member of the school board and six terms as a Glendale Alderman.

He and his wife Ann retired to Hot Springs Village, AR where he continued to pursue his passion for the game of golf and jazz. For a number of years he wrote a weekly column for the local village newspaper titled “Golf Matters” where he focused on wide ranging aspects of the game. When he was 76 he was an “age shooter” and he was very happy to achieve a number of holes-in-one during his long playing “career.” He was also very active in the Hot Springs Jazz Society and was instrumental in organizing a number of local jazz festivals. In recognition of his contributions, he was honored as a Lifetime Member of the Society. He thoroughly enjoyed his years in Arkansas and the many aspects of his life there. He made many good friends who's company he truly enjoyed in Hot Springs Village.

Ray was gregarious with a good sense of humor and love of a good story, whether he was doing the listening or the telling. He had a keen eye for detail and the nuances of any situation. He was known for pronouncing certain well enjoyed places or events as truly “bodacious”, which included his afternoon Scotch and water.

It was Ray's wish that his body be donated to the UW-Madison Medical School and his family is grateful that his wish was fulfilled and that his body was accepted and will be valuable in the training of medical students.

His family wishes to extend their gratitude to the staff of Appleton Retirement Community and Heartland Hospice for their compassionate and tender care for Ray and their support for his family.

He is survived by his children, Jeff (Kathy) of Glendale, Wisconsin and Janet (Richard) Jandl of Appleton, Wisconsin; his grandchildren, Mark and Brian Huntsinger of Glendale, Wisconsin; his brother Richard (Mary Lee) Huntsinger of Paradise, Texas; and numerous nieces and nephews. He was preceded in death just five weeks ago by his wife Ann (nee Novosel) Huntsinger with whom he celebrated their 72nd wedding anniversary on November 25, 2016; their son, John and his sibling Ann (nee Huntsinger) McGory and her husband “Mac” McGory.