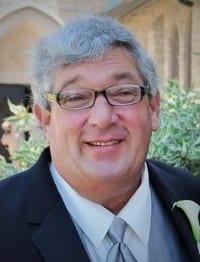 A private memorial service for Randy will be held at the Wichmann Funeral Home in Appleton, with Rev. Ethan Tews officiating.

Randy Wyman, age 63, of Appleton, passed away June 26, 2020 with his sons at his side after a short battle with numerous health issues including cancer. Randy was born in Appleton on December 29, 1956 to Lona (Lange) and the late Marvin Wyman. He graduated from Appleton East High School. In July of 1977, he married Amy Herman, who preceded him in death 3 years to the day.

Randy was a man of sacrifice powered by love and devotion. As an over-the-road truck driver, he spent a great deal of time away from home to provide for his family, while still sharing his humor and laid-back attitude about the world with his sons and those around him. You could always count on Randy for some good stories and bad jokes around the campfire or dinner table. He cared for his wife lovingly and unconditionally, especially through some of her worst end-of-life times, and he cherished visits with his grandchildren. Professionally, Randy was recognized with multiple safety awards for logging two million miles with zero accidents, incidents, or losses. In addition to driving, he held roles in training and evaluation, and learned Spanish so he could teach bilingually.

Randy is survived by two sons: Gary (Liz Krumwiede) Wyman of Green Bay and Anthony (Jamie) Wyman of Sheboygan Falls; his mother: Lona (Albert) Eg of Little Chute; five grandchildren: Carson, Ava, Ellie, Amelia, and Alyssa; a sister: Debra (Burt) Blank of Appleton; a brother: Ron (Lorelei) Wyman of Little Chute; as well as nieces, nephews, other relatives, and friends. He was preceded in death by his father, his wife Amy, and two dear friends: Brian Houlihan and John Beckstrom.

A private memorial service will be held at Wichmann Funeral Home, 537 N. Superior Street in Appleton.

A private memorial service for Randy will be held at the Wichmann Funeral Home in Appleton, with Rev. Ethan Tews officiating.