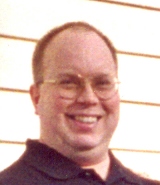 Randy Evenson, age 43, passed away at St. Elizabeth Hospital, Appleton, on Saturday, July 11, 2009. He was born on July 13, 1965, in Oshkosh, to Ronald Evenson and the late Joan (Bruss) Evenson. Randy married Kelly Christie on September 28, 1991 in Kimberly. He was a graduate of Winneconne High School, attended the University of Wisconsin-St. Point, and graduated from Fox Valley Technical College. Randy was employed as a Mechanical Engineer at Baysek Machines, Incorporated of Amherst, Wisconsin. He enjoyed fishing with his brother Andy, cooking, playing “Titan” with his friends, computer games, collecting comic books and science fiction books, swimming and walking, and especially the time he spent with his family. Randy served as president of the Kimberly JCs for four years and, with Kelly, volunteered at Compassionate Canines. Survivors include his wife of 17 years, Kelly; his son, Logan; his father; Ronald Evenson, Waupaca; his brothers, Andy Evenson, Winneconne and Eric Evenson, Greenville; his sisters, Marilyn (Ronald) Haywood, Bastrop, Texas and Susan (John) Comtois, Washington, D.C.; his nieces and nephews, Luke Evenson; Ronnie, Nathan and Lincoln Haywood; Christopher, Ian, Elizabeth, John, and Evan Comtois; his mother and father-in-law, Carol “Mom” (Ray) Christie-Mogensen, Appleton; brothers-in-law, Darin (Debbie) Christie, Appleton; Mark Christie, Little Chute and Steven (Laura) Christie, Oshkosh, his aunts, uncles, cousins and many friends. He is further survived by his dear friends, Joe Schuler and Mark Christie. Randy also enjoyed the company of and loved his cat, Loki and his border collie, Katie. He was preceded in death by his mother, Joan, and his grandparents, Orville (Laurena) Evenson;. Memorial services will be held at 3:00 p.m. on Friday, July 17, 2009, at WICHMANN FUNERAL HOME—TRI-COUNTY CHAPEL, Menasha, with Rev. Dennis W. Belter officiating. Friends may call at the funeral home on Friday from 1:00 p.m. until the time of services. Randy's family would like to extend a sincere thank you to Jim Bootz, his chiropractor; the staff at St. Elizabeth Hospital Emergency Room; Chris and Carlene Czarnik and Sister Nettie, for their loving care. In lieu of flowers, a memorial has been established in Randy's name.
Wichmann Funeral Home
Tri-County Chapel
3212 S. Oneida Street
Menasha 831-9905
Online Condolences
www.wichmannfargo.com