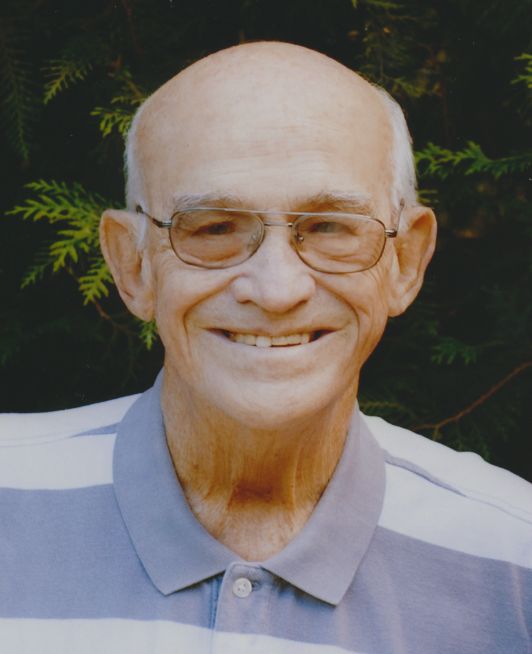 Ralph was born to Roscoe T. and Augusta (Olander) Gage on March 12, 1924, at St. Elizabeth Hospital in Appleton. His five older siblings were all born at the family home at 420 W. Fifth Street in the Old Third Ward.

Ralph was a proud member of Appleton High School’s class of 1942. He represented the class at Badger Boys State, ran for Governor and spoke at his high school commencement. Ralph enrolled in pre-med studies at Marquette University. He continued his medical studies while serving in the United States Naval Reserve at Lawrence College and Great Lakes Naval Hospital. Ralph answered a second call to serve his country during the Korean War and served in the Army Air Force while assigned to Langley Air Base near Newport News, Virginia. His service as a medical officer left him with a deep appreciation for the sacrifices made by those with whom he served.

After his time in the reserves, he continued his medical studies at Marquette and then served as an intern at St. Elizabeth Hospital. In 1948, he joined Dr. Don Curtin in a general medical practice. 1948 was also the year he married Mary Joye Hostetter of Nekoosa, Wisconsin. They enjoyed over 50 years together raising their four children and playing tennis with their friends and neighbors until her passing in 1999.

Except during his second period of military service, he worked primarily out of the office on Kimberly Avenue until 1985 when he retired. His first office was above Hammen’s Bar in Little Chute. During his 31 years of practice in the Valley, he delivered over 3000 babies.

Doc enjoyed his partnerships with Don Curtin and Bill Knoedler in the Kimberly office and a long time association with Dr. Frank Van Lieshout in Little Chute. His service to the community included about 10 years on the Kimberly School Board, two terms as Chief of Staff at St. Elizabeth Hospital, a term as President of the County Medical Society, Village Health Officer for 21 years, and team physician at Kimberly High School for 25 years. He immensely enjoyed his association with the great Papermaker teams and his friendship with their coaches including Gil Frank, Jim Nirschl, Jim Koehn, and many others. As a result of this commitment, he has a place in the Kimberly Athletic Hall of Fame.

Ralph retired from medical practice in 1985 but continued to be of service. He volunteered for over 25 years as a mentor at the Sheltered Workshop programs on Brewster Street in Appleton. He also volunteered with the Hospice Program at Affinity Health and gently guided numerous persons during their final months on earth.

Ralph is survived by his wife Lois Gage. Lois and Ralph were married October 13, 2001, and she brought great joy and companionship to his later years. Ralph is also survived by his children Michael (Mary) Gage of Appleton; James (Sue) Gage of Cincinnati, Ohio; Patrick (Barbara) Gage of Waunakee, Wisconsin, and Kathy (Ben) Van Hout of Maple Bluff, Wisconsin.

Ralph shared his dedication to work and family generously and in an unassuming way. He loved simple pleasures in life like telling stories with family and friends and playing games of tennis, golf, and cards. He had a natural sense of proportion and humor that was enjoyed by all. He liked to keep score of card games and tended to win when he did. He will be deeply missed.

The funeral liturgy for Ralph will be held at 10:30 AM on Friday, July 28, 2017 at ST. JOSEPH CATHOLIC CHURCH, 410 W. Lawrence Street in Appleton with Fr. Jim Leary, OFM Cap. officiating. Family and friends are invited to gather at the Jansen Fargo Funeral Home, 204 E. Kimberly Avenue in Kimberly on Thursday, July 27, after 4:00 PM. Visitation will conclude on Thursday evening with a prayer service at 7:00 PM, and will resume at church on Friday morning from 9:00 AM until the time of the service. Interment will take place in Holy Name Cemetery, Kimberly.

In lieu of flowers, a memorial in Ralph’s name has been established for St. Joseph Parish. For more information or to share a memory of Ralph, please visit www.wichmannfargo.com.

The family would like to thank and acknowledge Affinity Hospice Services, St. Paul Home, and Dr. Wright and Dr. Kohl and their staffs at St. Elizabeth Hospital for the care they provided.