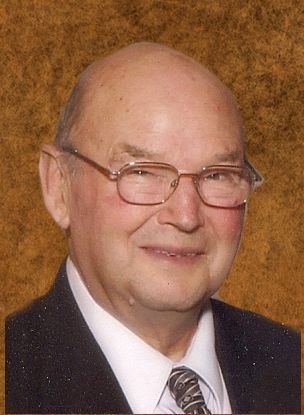 Ralph Meulemans, 86, of the town of Kaukauna passed away peacefully in his sleep on Sunday, March 13th, 2016. He was born on November 21, 1929 in Wrightstown. The son of the late Frank and Margaret (Brittnacher) Meulemans. On November 19, 1949, he married Mary Alice DeBruin at Holy Cross Catholic Church, Kaukauna. Ralph was a life time member of Holy Cross Catholic Church. Many will remember him from his years driving tow motor at Thilmany's. He also worked part-time at Weyers Implement and VanWychen Construction. He was an active member of the Queen of Peace Choir, Knights of Columbus, and a retired member of the Cemetery Committee for Holy Cross. Besides work Ralph spent time playing softball, golfing, bowling, deer hunting, and fishing. He especially enjoyed his fishing trips to Winnie with Pete and the group, breakfast at Ricco's with Chops, going up-north with Schumann, road trips with Joe and Father Paul. More recently his past-times were mowing his lawn, playing cards, sitting in his swing watching the wildlife in his own yard and having people stop and visit him at his house. He was well known for his delicious tomatoes and sharing them with neighbors.

The funeral liturgy for Ralph will be held at 11:00 AM on Thursday, March 17, 2016 at Holy Cross Church in Kaukauna. Fr. Tom Pomeroy will officiate, and entombment will be in Highland Memorial Park. Friends and family may gather at the church on Thursday morning from 9:00 AM until the time of the service.