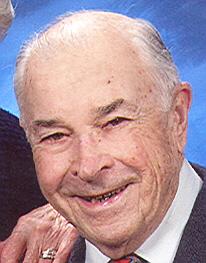 Ralph De Decker, age 82, of Appleton, passed away at Cherry Meadows Hospice, Appleton, with his family surrounding him on December 18, 2007. Ralph was born on January 5, 1925, in Appleton, to the late Louis and Ada De Decker. He married Priscilla Hamer on September 30, 1944, in Appleton; she preceded him in death on December 6, 2007. Ralph was a 1943 graduate of Appleton High School and proudly served his country as a commissioned navigator in the Air Force during World War II. He was a wire weaver at Appleton Wire Works for 14 years; he later owned and operated a Servicemaster firm for over 44 years. Ralph was active in his church, an enthusiastic supporter of ACES and a member of the steering committee that founded Xavier Catholic High School. He was also active with community service organizations, including the Serra Club, Kiwanis Club of Northside Appleton, Columbus Club and the Right to Life Chapter. Ralph was an active member of the Appleton Chamber of Commerce, serving on the State Legislative Committee in 1969 and on the Chamber‚Äôs Educational Committee in 1969 and 1970. As a member of the Board of Directors of the Appleton Golden Age Club, he participated in the fund raising efforts for the expansion of the Golden Age Clubhouse along with other projects of the Golden Agers. He also worked on fund drives for the Community Fund, Cystic Fibrosis, and Heart Fund, to name a few. A past Grand Knight of the Knights of Columbus Council 4802 of Appleton, he served as chairman of various committees in that organization before advancing through the chairs to the position of Grand Knight. Ralph enjoyed fishing, bowling and caring for his apple trees. Survivors include his ten children, his 28 grandchildren; his four great-grandchildren; and his two brothers. He was preceded in death by a brother, a grandson and a granddaughter. The Funeral Liturgy will be at NOON Friday, December 28, 2007, at ST. PIUS X CATHOLIC CHURCH, 500 West Marquette Street, Appleton, with Fr. Thomas J. Farrell officiating. Friends may call directly at the church on Friday, December 28, 2007, from 9:00 a.m. until the time of services. The family would like to extend a sincere thank you to Dr. John Swanson, Fr. Thomas J. Farrell, the staff at ThedaCare at Home Hospice (especially Amy) and the staff at Cherry Meadows Hospice for their loving care. A memorial has been established in Ralph‚Äôs name.
WICHMANN FUNERAL HOME
537 North Superior Street
Appleton 739-1231
www.wichmannfargo.com

Father of ten, outstanding businessman and leading community figure, Ralph De Decker lived up to all early expectations for a distinguished future.