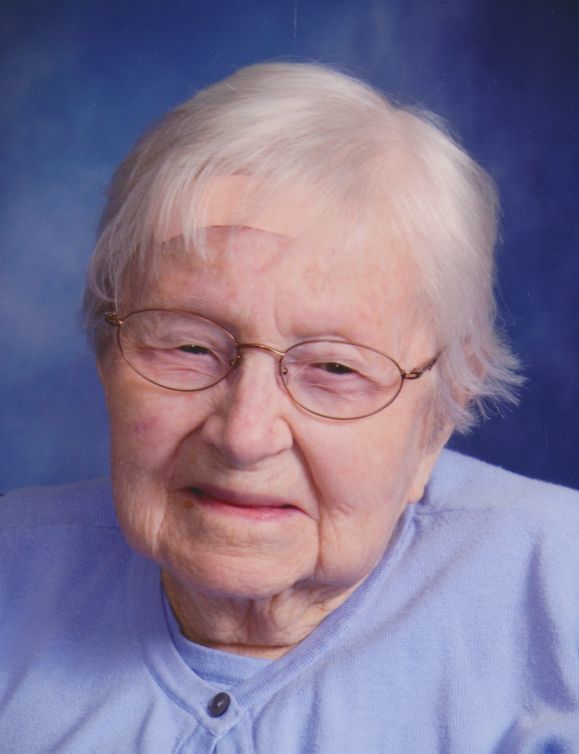 Rachel Dumke, age 105, of Appleton, passed away peacefully on Wednesday, August 31, 2016, at Rennes Health and Rehab Center. Rachel was born in Seymour on the Tubbs family farm on April 19, 1911, to the late George and Lavina (Hahn) Tubbs, in the house that still stands on Tubbs Rd, two miles north of Seymour.

Her life was long, simple, and many times difficult. Her early years were spent on the family farm, doing chores, and assisting her mother with housework and gardening. At the age of eighteen, with the encouragement of her parents, Rachel moved to Green Bay, where she worked as a waitress at Kaap's Restaurant. It was at this time that she met and married her first husband, Peter DeMoulin, who worked as a maker of caskets. He died in 1940. They had one daughter, Betty (DeMoulin) Schubbe, who preceded her mother in death in October 5, 1987, at the age of 54. Through a neighbor, Rachel met Arthur Dumke, and they were married on September 2, 1942. Art and Rachel settled in Appleton at 321 S. Badger Ave., in a small, two-room house where their family increased to include four more children, Jim, Diane, Mary, and Carol. Clearly needing more room, they moved to 1029 W. Franklin St., where they lived for over fifty years and raised their family. Art died on May 6, 1996, at the age of 87, and Carol passed on January 31, 2010, at the age of 59. During those years Rachel created so many wonderful family memories, which included homemade bread and rolls, Sunday chicken dinners, quilts and Afghans for all her grandchildren, unforgettable Christmas Eve gatherings, and stunningly beautiful flowers in her garden, to name just a few.

Loving and serving the Lord and her family were passions in Rachel's life. She was a member of First English Lutheran Church in Appleton for 85 years, teaching Sunday school, assisting with catechism, and adding many special touches as one of the church's quilters.

Rachel is survived by one son and two daughters:

In addition to her parents, husbands, and daughters, Rachel was preceded in death by her sister Harriet (Melvin) Marcks and her brother Vernon (Ruth) Tubbs, and by two sons-in-law, Charles McGinnis and Bernie Schubbe.

A funeral service will take place at 11:00 a.m. on Tuesday, September 6, at First English Lutheran Church, 326 E. North St., Appleton, with Rev. Mary Bauer and Rev. Dr. Jim Dumke officiating. Friends and relatives may visit directly at the church on Tuesday, from 9:00 a.m. until the time of service. Interment

will take place at Appleton Highland Memorial Park. In lieu of flowers, please send your gifts to the charity of your choice or direct them to a member of the family.

The family would like to thank the staff at Rennes Health and Rehab Center for the compassionate care shown to Rachel in the last three years.