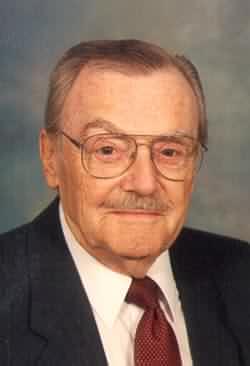 R. Bruce Scott, a loving Husband, Father, Grandfather and Great-grandfather, died on Monday, September 2, 2002. Bruce was born on September 12, 1914 in LaHarpe, Illinois. He was the son of the late Charles L. Scott and Grace (LaFavre) Scott.

He was married to Mabel Krause on June 11, 1941. He is survived by his wife of 61 years. Also surviving are one son, Kendall Scott and his wife Jan of Appleton; one daughter, Katherine and husband Tom Coulter of Minneapolis; four grandchildren, Jeffrey Scott of Madison, WI; Teresa Minks and Husband Al of Appleton; Jessica Coulter and Zachary Coulter of Minneapolis, MN. and one great-grandchild, Casey Minks.

Bruce was the youngest of six children, all of whom have preceded him in death; his brothers Roy, Frank, Kirk and Lloyd and a sister, Pauline Scott Curtis. Also deceased is a beloved Aunt Clara who raised Bruce from infancy when his mother died.

He grew up in Burlington, Iowa where he graduated from high school and attended college. He was employed by the old F.W. Woolworth Co. for 26 years, being a store manager in Wisconsin, Iowa, Minnesota and North Dakota. After that he operated his own business in Harvey, North Dakota. He retired in 1979 and he and his wife moved to Appleton.

Bruce was a veteran of WWII. He spent three years in the Army and was overseas from 1943 to 1946 and fought in the European theater.

He was a long time member of Kiwanis in Wisconsin, Minnesota and North Dakota. He was also a member of the Masonic Lodge and a Shriner. He was active in SCORE (Service Corps of Retired Executives) in Fargo, ND and Appleton. He also gave of his time and energy as a member of Prince of Peace Lutheran Church.

The funeral will be held at Prince of Peace Lutheran Church on Calumet St. with Pastor Gary Nokleberg and Pastor Roger McQuistion officiating. The time of the funeral is 11:00 a.m. on Thursday, September 5, 2002. Visitation will be at the church from 9:00 a.m. to 11:00 a.m. the day of the service. Interment will be at Riverside Cemetery on Owaissa St.

A memorial fund has been established for the Theda Care at Home Hospice program and Prince of Peace Lutheran Church.

A special thank you from the family to Dr. John Swanson and his staff and to the Theda Care at Home Hospice for their support during Bruce‚Äôs illness.

God gives us friends and those we love
To share our days on earth.
He watches us with loving care
And takes us by the hand.
He blesses us with countless joys
And guides the lives we‚Äôve planned.
Then when our work on earth is done
He calls us to His side
To live with Him in Happiness
Where Peace and Love Abide.