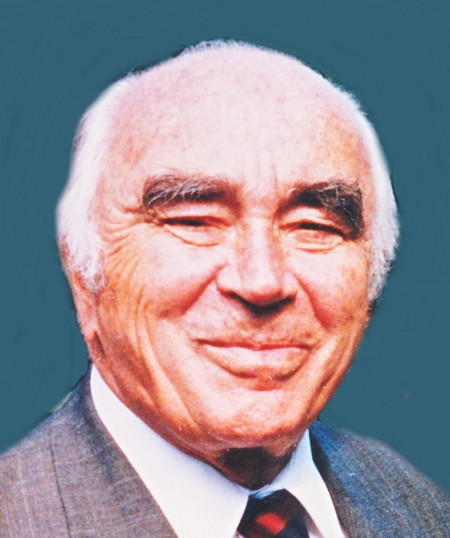 Mojmir Povolny, Emeritus Professor of Government and Henry M. Wriston Professor of Social Sciences at Lawrence University, passed away at home in Appleton, Wisconsin, on Tuesday, August 21, 2012. Professor Povolny is survived by his wife of fifty-six years: Joyce (nee Wuesthoff) Povolny; two sons: David (Susan) and Daniel (Kathleen); ten grandchildren, and four great-grandchildren. Mojmir and Joyce were joined in marriage on July 15, 1956. His extended family lives in the Czech Republic.

Professor Povolny was born on November 25, 1921 in the Moravian village of Menin in what is now the Czech Republic. He obtained a J.D. degree from Masaryk University School of Law in Brno, Czechoslovakia. During his university studies he was active in the Benes Party's democratic youth movement. From 1947 until 1948 he served as the executive secretary of its Economic Council in Prague. Aided by sympathetic members of the Communist secret police, he escaped from Czechoslovakia after the Communist coup d'état in April 1948. He spent the remainder of his life in exile, briefly in Paris and since 1950 in the United States.

While in Paris, Professor Povolny worked for a year as an assistant to the European Director of the Carnegie Endowment for International Peace and at the same time studied international law at the Sorbonne's Institut des Hautes Etudes Internationales. He emigrated to the United States in 1950 and received his PhD in international relations from the University of Chicago in 1954. He became an American citizen in 1956. From 1954 until 1957 he served as an Assistant Director in the International Student Program of the American Friends (Quaker) Service Committee, first in Philadelphia and then in Tokyo. He returned from Japan to teach briefly at the University of Chicago. In 1958 the Povolny family moved to Appleton, Wisconsin where Professor Povolny went on to teach at Lawrence University from 1958 until his retirement in 1987. In recognition of his commitment to education, the Government Department of Lawrence University named a lecture series in his honor.

Parallel to his academic career, Professor Povolny played an active role as a political exile devoted to the liberation of Czechoslovakia from Communist and later Soviet occupation. He was a member of the Council of Free Czechoslovakia headquartered in New York City and in 1974 was elected as its Chairman. In that position he led the Council until the fall of the communist regime during the Velvet Revolution in 1989. Beginning in 1989 Professor Povolny travelled frequently to the free Czech Republic at the government's invitation to assist with the reconstruction of his homeland's civil society. On October 28, 1995, the independence day of the Czech Republic, President Vaclav Havel presented him with the Masaryk Order, the Czech Republic's highest civilian honor “for his service to democracy and human rights”.

Professor Povolny was an avid gardener and traveler, having lived in Paris and London during his tenure at Lawrence, and wrote and published numerous articles and speeches. Professor Povolny waspreceded in death by his father: Antonin Povolny; his mother: Marie (nee Konecny)Povolny; a brother: Borivoj (Olga) Povolny; and a grandson: Jacob Daniel Povolny.

A memorial service will be held on Saturday, August 25 at 10: 00 AM at Wichmann FuneralHome, 537 N. Superior Street in Appleton. Fr. Patrick Twomey will officiate, and interment will follow in Riverside Cemetery. Friends may call at the funeral home on Saturday morning from 9:00 AM until the hour of the service. Memorials may be donated to American Friends Service Committee, 1501 Cherry Street, Philadelphia, PA 19102. Online condolences may be expressed at www.wichmannfargo.com