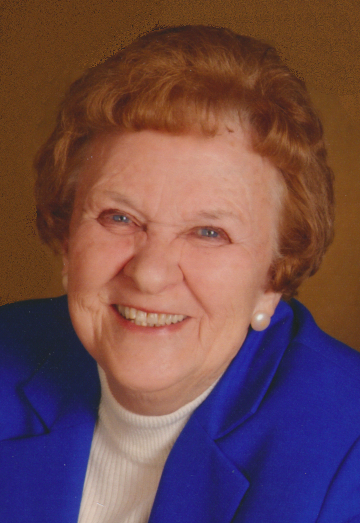 In light of current circumstances, a public memorial service will be announced at a later date.

However, a live stream of the private service from St. Paul Lutheran Church can viewed here on Monday, April 6, at 12:00 Noon.

Phyllis Winkler Hass passed into the waiting arms of her Lord early on the morning of Thursday, April 2, 2020, with her family at her side. She was blessed with 92 years on this earth. She was born January 8, 1928, in Kansas City, Kansas, daughter of the late Richard and Amanda (Schoenick) Hinz. God was good to Phyllis her entire life. He provided a fine husband for her, as she married Lester Winkler at St. Paul Lutheran Church in Appleton. Lester went to be with Jesus on February 20, 1998. On March 26, 2006, she married Glenn Hass, another fine, Christian partner, at Mount Olive Lutheran Church. Glenn was called home just this past August.

Phyllis worked at the Wisconsin Telephone Company until her retirement in 1983. She enjoyed spending time outside, working in the yard, and spending time at church. She had been a proud member of St. Paul Ladies Aid for over fifty years.

Family gatherings took the top prize in Phyllis’ social life. She loved being with her family and always looked forward to the Hinz family breakfasts at Mary’s Family Restaurant. It was a rare event when she lost a game of Chinese Checkers – she was nearly unbeatable!

When circumstances permit, a memorial service at Phyllis’ beloved St. Paul Lutheran Church will be announced at a later date.

The family would like to thank Pastor Don Ninmer for his many visits, letters, and prayers. Phyllis held a special place in her heart for him, and his kindness, care, and compassion will never be forgotten by our grateful family.

In light of current circumstances, a public memorial service will be announced at a later date.

However, a live stream of the private service from St. Paul Lutheran Church can viewed here on Monday, April 6, at 12:00 Noon.