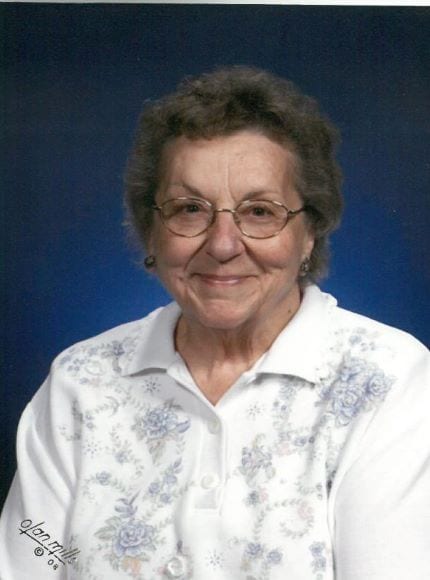 Phyllis J. (Chady) Trunk (nee Schwall), age 95, passed away on February 21, 2020. Phyllis was born on November 17, 1924 in Shiocton, Wisconsin to Louis J. and Myrtle (Ardell) Schwall. She was a 1942 graduate of Shiocton High School. She was a member of First Congregational United Church of Christ in Appleton. She was a longtime employee of A.T. & T. and later worked with Kimberly Clark as an Administrative Assistant. She retired in 1988.

On March 30, 1944 she married Robert Stillman Chady of Appleton at First Congregational Church in Shiocton. He preceded her in death on January 18, 1977.

On April 5, 1992 she married Werner A. Trunk of Appleton in Slidell, Louisiana. They enjoyed traveling in the U.S. and spent many years vacationing in Gulfport, Mississippi. He preceded her in death on March 24, 2015.

She is further survived by great-grandchildren: Shane, Isabella, Summer, Autumn, Miles and Leah Chady, Lucas Forman, Benjamin and Bowen Kasprzyk, Phillip Chady, and newborn Emery Hager as well as many nieces, nephews and other relatives and friends.

In addition to her husbands, she was preceded in death by two sons, Robert L. Chady and Stephan L. Chady, grandson Kevin Chady, son-in-law Jerry Van Handel, her sister, Marion Bruehl and her husband George and her sister Virginia and Virginia’s husbands Phillip Mitchell and Bob Guilfoyle.

Funeral services for Phyllis will be on Sunday, March 1, 2020 at 1:00pm at First Congregational United Church of Christ, 724 East South River Street in Appleton with Rev Nick Hatch officiating. There will be a visitation on Saturday, February 29, 2020 from 4:00pm to 7:00pm at Wichmann Funeral Home, 537 N. Superior Street in Appleton and on Sunday, prior to the funeral at church from 12:00pm to 1:00pm. Burial will be at Crystal Lake Cemetery near Waupaca. For more information and to express condolences, please visit.www.wichmannfuneralhomes.com.

The family would like to thank Patricia Trunk and Lori Van Handel for helping care for mom the last few years.