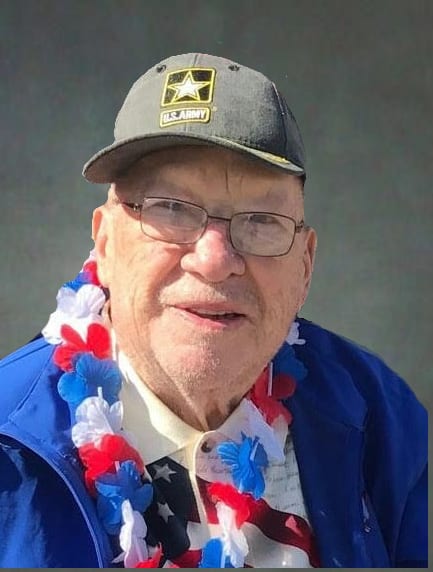 In light of current events, a public celebration of life will be held at a later date.

PFC Carlton F. Springer passed away peacefully in his home on Wednesday morning, March 25, 2020, surrounded by his family.  Carlton was born July 4th 1930 the son of the late Carl and Mildred Springer.  As a young man, Carl was a phenomenal baseball player. He played for the San Francisco Giants and then played locally for the Oshkosh Giants and Menasha Mac’s.  Carl worked at George Banta until his retirement in 1992. He also served in the United States Army during the Korean War from 1951-1953 in the 51st Battalion Signal Corps. Carl had the honor of participating in the Old Glory Honor Flight Mission XXIX t to Washington, DC with his son Scott Springer in 2015.

Carl enjoyed having his family together whenever possible. He enjoyed watching the grandkids swim in the pool while playing a friendly game of cribbage. And all with such a big smile. Carl had a special bond with his great-grandkids and he enjoyed any time he could spend with them. Carl was an avid Wisconsin sports fan! He loved his Green Bay Packers, Wisconsin Badgers and he was also entertained watching boat and horse racing. He will be watching his friends at Tony’s Bar from above.

He was preceded in death by his wife Mary Jane Springer, daughter Carla Lindgren, and grandson Hunter Wolf.

His daughter Susan Wolf, son Thomas Springer and granddaughter Allison Jahnke were the miracles that allowed Carl to remain at home and fight until the end.  And a fighter he was. We can never give enough thanks or show enough gratitude for our wonderful caregiving staff that allowed Carl to remain in his home and be with the people he loved the longest. Endless thanks to Cori Gambsky, Wally Ehlke, Kim Dahl, Mary Spilski, Molly and Andrew Harder, Kelly Monday, Nurse Carrie and the wonderful hospice team from Ascension.

At this time, a private family service will be held, and a celebration of life will be scheduled once the world returns to some sort of normalcy.  A memorial will be established in Carl’s name.

In light of current events, a public celebration of life will be held at a later date.