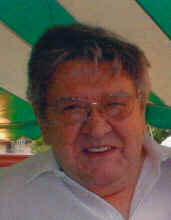 Age 80, Peter finally finished something, his wonderful life, and joined the Lord.

June 23, 1951 married Ans Jansen and they had 51 beautiful years together.

June 1959 Peter and Ans, and their two children, Dorothy and Andy came to the U.S. to Appleton and never moved again. Son Michael was born in Appleton.

Peter was very proud to be a Dutch born – American.

He worked for Miller Electric for 22 years and retired in 1984.

Peter is survived by his wife Ans, his daughter, Dorothy Nelson and her husband Dave and their children Amanda and Matt.

By his son Andreas Van Herwynen and his fianc√©e Carla, and Weston and Whitney.

By his son Michael Van Herwynen and his wife Jenny and son Robert.

The funeral service will be held on Saturday, August 24, 2002 at St. Thomas More Catholic Church (1810 N. McDonald St.) at 11:00 a.m. with Father Gerald Falk officiating. Friends will be received directly at the church on Saturday from 9:00 a.m. until the time of service (11:00 a.m.). Entombment will be at Highland Memorial Park.

We also would like to thank all the doctors and nurses at AMC, ER, 4th floor, 2nd floor and ICU all for the special care given to Peter. Also, Father Falk and Pastor Nolan. We truly appreciate all your support.

Tot ziens! YA, YA