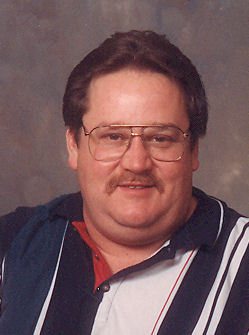 Peter John Keberlein, age 58, of Neenah, passed away peacefully surrounded by his family on Friday, August 9, 2013 at Manor Care. Peter was born on March 18, 1955, son of the late Clarence and Margaret Keberlein. He worked for over 33 years at Neenah Foundry. He was also a member of Calvary Chapel for many years.
Peter was an avid hunter and fisherman; fishing muskie and hunting deer, geese and ducks. He enjoyed the outdoors whether he was out golfing with his sons or out on his boat. He also loved to ballroom dance. Peter will always be remembered for his kind heart, his great sense of humor, and the love he had for his sons.
Peter is survived by his sons, Jacob Keberlein, Appleton and Lucas Keberlein, US Navy, and daughter in law Melissa Keberlein, South Carolina and his grand dog Merlin.
Peter will be greatly missed by his brothers and sisters, Robert Keberlein, Sturgeon Bay; sister-in-law Edith Keberlein, Chicago; Ronald Keberlein and Dianne Diedrich, Appleton; Joyce and James Ziolkowski, Menasha; Richard and Yvonne Keberlein, Menasha; brother-in-law John Strebe, Appleton; Mary Keberlein, Menasha; twin sister Paula and Frederic Endter, Menasha; Cheryl and Rodney Wolf, Appleton; Kurt and Michelle Keberlein, Menasha. Peter is also survived by 17 nieces and nephews, 18 great nieces and nephews.
Peter was preceded in death by his father Clarence Keberlein in 1983, his mother Margaret Keberlein in 1999, sister Susan Strebe in 2009 and his dog Copper.
The funeral service for Peter will be held at 1:00 p.m. on Tuesday August 13, 2013 at CALVARY CHAPEL (2136 East Newberry St. Appleton) with Pastor Lane Gibson officiating. A time of visitation will be held from 11:00 a.m. until the time of service. Online condolences may be expressed at www.wichmannfargo.com.
Special thank you to Heartland Hospice, Dr. Anderson and Manor Care of Appleton for the years of care they have given to Peter.
Peter's greatest loves were his boys, his faith and the outdoors.