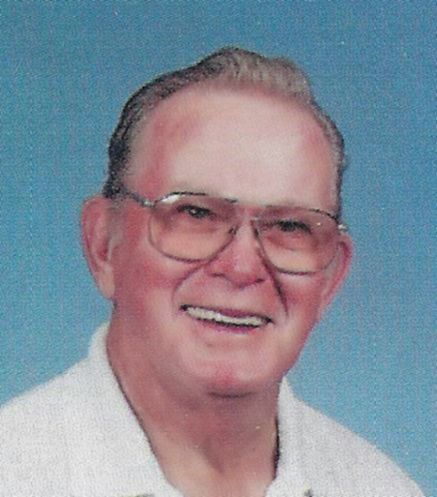 Peter D. Harris, age 93, passed away on Friday, August 21, 2015, at Oakridge Gardens in Menasha. Peter was born on March 14, 1922 to the late William and Anna Harris. After graduating from Hortonville High School, Peter did some traveling before returning to Menasha to start his career at Marathon/American Can. It was there that he met his future wife, Elizabeth “Betty” Ciske (or as he called her, “Bets”). They were united in marriage on June 12, 1948. Peter and Betty celebrated almost 46 years together before her passing on March 18, 1994. Together they had three daughters, Chris, Connie, and Cindy.

Peter worked at American Can for over 40 years, beginning his career as a millwright and retiring as a process engineer. He loved golfing, fishing, bowling, and especially watching the Brewers and the Packers. He also enjoyed playing Bingo with the other residents at Oakridge Gardens. As his old neighbors knew, he had a passion for collecting anything and everything to put in his yard – just in case he would need it someday. After he could no longer drive, Peter enjoyed going for rides to Hortonville and Shiocton with his daughter Cindy, and also for rides with Chris and Connie to look at the dams in Menasha/Neenah and to see if the Bergstrom Eagle statue in Neenah had flown away yet.

The Funeral Mass will be held at 11:00 am on Thursday, August 27, 2015 at St. Mary Catholic Church, 528 Second Street in Menasha with Fr. Paul Paider officiating. Visitation will be held from 9:30 am until the hour of the Mass at the church. Interment will take place at 3:00 pm in St. Mary Cemetery in the Town of Menasha. In lieu of flowers a memorial will be established.

The family would like to express their gratitude to the staff of Oakridge Gardens as well as the staff at Heartland Hospice, especially, Corrie and Ashley, for the loving and compassionate care and kindness given to Peter during his stay.

Remember, for everything you have lost, you have gained something else. Without the dark, you would never see the stars. – Unknown