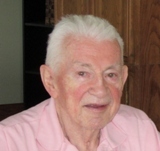 Paul Krafft, 87, passed away peacefully on Sunday evening, October 14, 2012. Paul was born in Nuremburg, Germany on June 4, 1925, son of the late Paul and Theodolinde (Nebel) Krafft. He served in World War II as a tank gunner, and after the war was employed in the United States Army as a clerk in the supply corps and as a general investigator. In July of 1953, he came to Racine, Wisconsin, to begin a career at Western Publishing, where he worked his way up to the head of purchasing. On December 14, 1965, Paul married Mary Ann Alexander; their son, Peter, was born a year later. In 1983, he continued his career at the George Banta Company until 1993. In September of 1991, Mary Ann passed away. A year later, he met Margaret Burkhard and enjoyed a special friendship for the following twenty years. Paul was always grateful for the love and support of Margaret and her family.

Paul is survived by his son: Peter (Diane) Krafft of Orlando, and their daughter, Arabella, whom Paul saw for the very first time on his 86th birthday; two step-children: Avon (Bob) Walton of St. Petersburg, Florida and Anson Alexander of Houma, Louisiana; and a step-grandson: Sam Walton of Greenwich, Connecticut.

A memorial service for Paul will be held at 1:30 PM on Wednesday, October 17, 2012 at ST. MARY CATHOLIC CHURCH, 312 S. State Street in Appleton. Friends are welcome to gather at the church on Wednesday afternoon from 1:00 PM until the time of the service. Interment will take place at a later date at Appleton's St. Mary Cemetery. Online condolences may be offered at www.wichmannfargo.com.

The family would like to thank the staff at Heartwood Homes in Appleton. Paul was so appreciative of the personal attention and affection he received from all of you. Your kindness will never be forgotten.