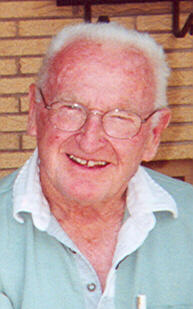 Age 90, one of God's carpenters was called home on Sunday, May 30, 2010 at Rennes Health and Rehabilitation Center after a short illness. He was born in Kimberly on June 22, 1919, the son of the late Henry and Frances (Ver Voort) Vanden Boogaard. On April 14, 1945, he married Evelyn Laux at Sacred Heart Catholic Church in Appleton. He served proudly in the Army Air Corp during WWII. After Paul was discharged he started his life as a carpenter for O.J. Boldt Construction Company for over 25 years. Paul loved going to their cottage on White Lake, outside Weyauwega. He enjoyed fishing and working on and around the cottage with his sons Paul and Tom. In his mid-seventies Paul tried his hand at golf. He always had fun.

The funeral liturgy will be at 12:00 p.m. on Thursday, June 3, 2010, at SACRED HEART CATHOLIC CHURCH, 222 E. Fremont Street, Appleton. Friends will be received at the church on Thursday from 10:00 a.m. until the time of the service. Burial will be in St. Mary Cemetery, Menasha.

The family extends a special thank you to the staff at Rennes and Renaissance for their compassionate care.

In lieu of flowers, a memorial fund in Paul's name is being established.