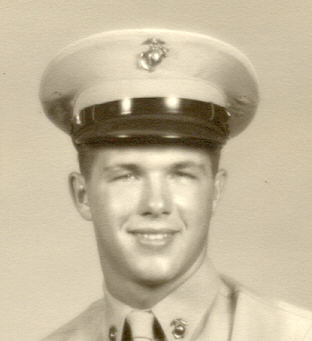 Patrick John Peter Jansen, Sr. passed from this world into the arms of Jesus on Wednesday, November 23, 2005 surrounded by his family.

Patrick was born on November 6, 1934 to the late Martin Sr. and Cora Jansen in Appleton. He was united in marriage to Carol Theresa Kohl on August 29, 1959. Patrick and Carol were blessed with four beautiful children.

Patrick attended school in Kimberly prior to joining the military. He enlisted in the U.S. Marine Corp, bravely serving his country during the Korean War. Following his service with the military, Patrick was employed by Kimberly Clark for the next 43 years, retiring in 1996.

He enjoyed fishing on Lake Winnebago until the storms chased him off the water, camping with his children when they were little, woodworking and carving animals, and being the handyman for his entire family.

He is also survived by his sisters: Mathilda Stuyvenberg and Dorothy Jansen both of Appleton; a brother: Archie Jansen of Combined Locks; his best friends, Dusty Albracht and John Marciniak; his friends, Nick and Dee Nakonecky and John Hovie; and his loyal canine companion, Grace.

Patrick was preceded in death by his wife Carol, his sister Ann Lemmers, his brothers Martin Jr. and Martinez and his precious grandchildren Bethany Gassmann and Owen Manteufel.

The memorial service for Patrick will be held at 3:00 pm on Sunday, November 27, 2005 at JANSEN FARGO FUNERAL HOME with Fr. Richard Allen officiating. Friends may call at the Funeral Home on Sunday from 1:00 pm until the time of service.

The family would like to extend their gratitude to the wonderful staff at Appleton Medical Center that cared for Patrick during the last month of his life.