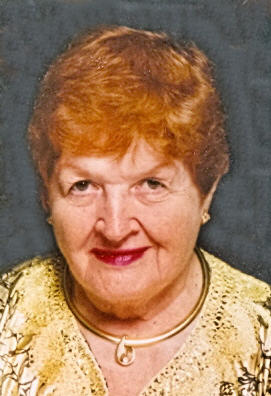 Patricia Louise Flanagan Baisch, age 85, Kaukauna, passed peacefully on August 2, 2010 at St. Paul Home in Kaukauna. She was born in Appleton on June 22, 1925, the daughter of Matthias and Anna (Vandenberg) Schaefer. Patricia graduated from Appleton West High School. She worked for Wisconsin Telephone Company as a service representative prior to marrying David J. Flanagan on August 28, 1948. They enjoyed twenty-four years of marriage, until his sudden death in 1972.

In addition to caring for her six children, Patricia worked for the Kaukauna Community Hospital as a Medical Records Librarian for twenty-four years, after receiving certification from the University of Wisconsin ‚Äì Madison. Nineteen years after David's death, Patricia married Stephen J. Baisch on February 10, 1990 and enjoyed twenty years of marriage together.

The funeral liturgy for Patricia will be held at 10:00 am on Saturday, August 7, 2010 at HOLY CROSS CATHOLIC CHURCH, 309 Desnoyer Street, Kaukauna. Father Tom Pomeroy and Father Jack Mullarkey will be officiating. Burial will take place immediately following the mass at the parish cemetery. A time of visitation will be held at the church on Saturday from 8:30 am until the time of mass. In lieu of flowers, a memorial fund has been established in her name.

Over this past year we have been surrounded by the love and support of so many. The family would like to extend a sincere thank you to Home Instead, especially Phyllis, Nancy and Melissa; to the staff at Appleton Health Care Center, especially Autumn, Paula, Sandy and Suzette. We would also like to thank Dr. David Koeper, Kay Conradt and the staff of the Nephrology Clinic of the Fox Valley, the staff of the Kaukauna Clinic, especially Dr. Paul Russo and his nurse Sue. Our sincere thank you to the staff of the St. Paul Home for their care and compassion, especially Nancy and Jean, as well as the Hospice staff of Julie, Karen, Bonnie, Sandi, Ellen, Sister Dorothy, Sister Lois Ann and Sister Joy. Special thanks to John, Carol, Missy Verkuilen and Irma Van Stiphout for all they did for Mom and Steve.