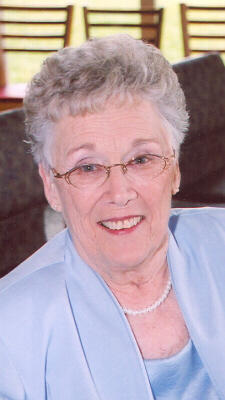 Age 82, passed away at Appleton Medical Center on July 23, 2010. She was born in Kaukauna on April 18, 1928, the daughter of the late Edward and Marjorie (Phillips) Kelly. On June 16, 1948, she married her husband of 49 years, Howard Van De Hey, who preceded her in death. Pat graduated from Appleton West High School. She volunteered at the Community Blood Center, served as secretary for Holy Cross Athletic Association for numerous years, and served on the board at the Environmental Center. Pat loved to read, volunteer, and spend time with her grandchildren. She will be remembered for being there for her family with love, advice, understanding and goodie bags.

Pat was preceded in death by her parents and husband.

The funeral liturgy will be at 12:00 pm on Friday, July 30, 2010, at HOLY CROSS CATHOLIC CHURCH, 309 Desnoyer St., Kaukauna, with Fr. Tom Pomeroy officiating. Friends will be received at the church on Friday from 10:00 am until the time of the mass. Burial will be in Holy Cross Cemetery, Kaukauna.

A memorial fund in Pat's name is being established for the Community Blood Center.