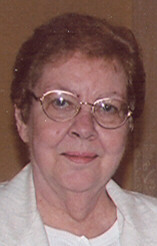 Age 68, of Kimberly, passed away Sunday, June 22, 2008, at St. Elizabeth Hospital.
Pat was born July 8, 1939, in Little Chute, the daughter of Alvin and Cecelia (Kroner) Liebergen. She attended and was a graduate of St. John's High School in Little Chute. On November 27, 1965, Pat was united in marriage to Paul J. Rettler at St. John's.
Pat was a homemaker, a loving wife, mother, grandmother, sister, and friend. She enjoyed doing crossword puzzles and watching sports on television, especially the Packers and Brewers.

The funeral mass for Pat will be celebrated at 4:00 p.m. Thursday, June 26, 2008, at HOLY SPIRIT CATHOLIC CHURCH, Kimberly Site, 600 East Kimberly Avenue, with Father David Beaudry as celebrant. Pat will be laid to rest in Holy Name Cemetery, Kimberly. Visitation will be from 2:00 p.m. Thursday until the time of mass at the church. In lieu of flowers, a memorial fund is being established in her name.

The family would like to express their thanks to the oncology nurses on 4 South and Dr. Goggins and his staff for their compassion and care they provided to Pat and the family during her stay at St. E's.