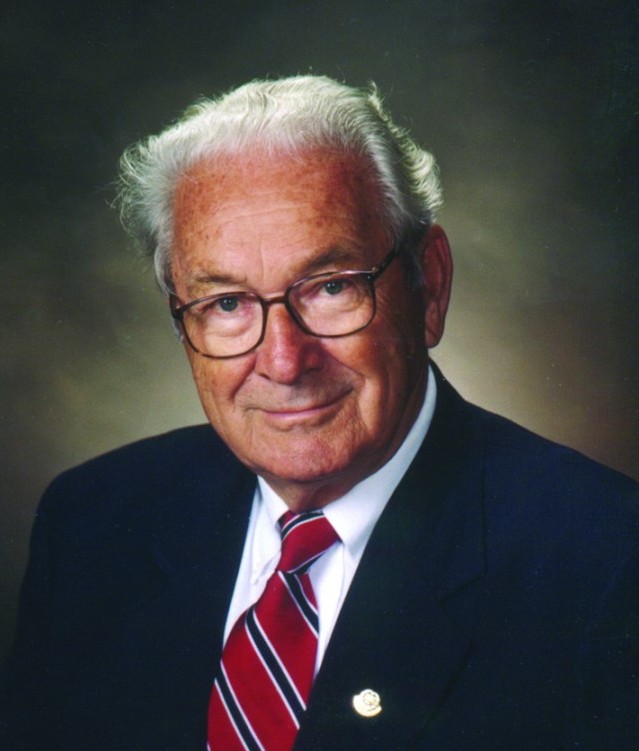 As his beloved Polish mother, Caroline, used to say, “O Jezus Kohany” – O Jesus Come Help Me. Otto Bytof, of Appleton, Wisconsin, passed away at the tender age of 95, after finishing his favorite food, a bowl of ice cream. He died peacefully on Thursday, August 2, 2018.

Always larger than life, Otto was born on October 22, 1922 on a farm in the Town of Hixon, Village of Withee, Wisconsin to Carl and Caroline Bytof (née Penczek), the fourth of seven children. After his father Carl died when Otto was young, his mother married Paul Szymczak, who became a beloved step-father. Otto spent his childhood swimming and fishing with his brothers in the Black River and of course walked miles to school carrying his tuba! He and his brothers sowed their oats travelling west harvesting crops along the way to finance the trip, before moving to Chicago for work.

In 1944 he went off to fight in WWII where he earned a Silver Star for rescuing soldiers trapped across enemy lines. His tour of duty also brought him through German concentration camps where he witnessed first-hand the atrocities of the Holocaust. He met his first wife, Dorothy (Dottie) at a USO dance while he was at Princeton training, they were married in Chicago in 1945, then returned to New Jersey where he earned his BS in Agriculture in 1948 from Rutgers University.

Otto and Dottie returned to Wisconsin where Otto first worked as a mortgage lender to farmers around Appleton. In 1955 Otto started what would become an illustrious and wildly successful real estate career, as a partner with Jake Van Leur. In 1960 he launched his own real estate company, Bytof Realty, which, due to his business acumen and winning personality, he grew into one of the largest real estate companies in Wisconsin. Together with his wife, Joyce, whom he married in 1975, Bytof Realty later joined Better Homes and Gardens, and then became Coldwell Banker The Real Estate Group (TREG), which the two then built into a statewide powerhouse. A passionate learner, Otto was a devotee of prominent business philosophers such as Og Mandingo, Dale Carnegie, and Zig Ziegler, and was always happy to share his knowledge and experiences with his colleagues through civic activities, which included serving as the President of the Wisconsin Realtors Association in 1970.

Otto’s interests were varied and deep. An avid golfer, he had two verified holes-in-one, and enjoyed playing regularly every fall along the Robert Trent Jones Trail in Alabama. He was fortunate also to take his dream trip to golf in Scotland. A big collector, he collected golf balls and tees from courses he played all over the world, as well as matchbooks from all his travels.

An enthusiastic reader and lifelong learner, Otto was never without a book in hand. He enjoyed travel and history, from his early family travel to the Jersey Shore and the 1964 World’s Fair in NYC, with his beloved mom in the back seat entertaining his children, to Florida, and then his later love, Mexico, where he and Joyce communed with family and colleagues at the Krystal in Puerto Vallarta and the Moon Palace in Cancun. His big trip was to Russia after Perestroika, around the time he had met Mikhail Gorbachev. A lifelong Republican, Otto collected elephants, which made it easier for people to buy something for a guy who had everything. He met presidents and foreign dignitaries, and spent a lot of time meeting with and supporting candidates for elected office locally, statewide, and nationally.

Otto was a long time member of Trinity Lutheran Church in Appleton, where he served on the Church Council. He enjoyed hunting, fishing, playing cards, and gambling, and won often at the craps table, roulette wheel, and slot machines. He was a member of the Piscatorial and Inside Straight Society, one of those ‘secret’ men’s clubs that included governors and luminaries from throughout the State. He loved his Jack Daniels and had one every night before dinner. He also loved a good steak, chocolate chip cookies, and of course, chocolate ice cream. Otto was stubborn – some would even say bull-headed, a favorite term of his – which probably helped him live so long. He loved having a cottage, first at Berry Lake, then at Legend Lake, and even went water-skiing at age 60!

In his later years he found great joy in seeing young children. He did crossword puzzles and word searches, and played cards right up to his final days.

Otto was predeceased by his first wife Dottie and second wife, Joyce; his parents, Caroline, Carl, stepfather Paul, and five of his six siblings: Olga, Matilda, Harry, Lester, and Violet. His brother Clarence passed away just a day after Otto.

The memorial service for Otto will be held at 1:00 PM on Sunday, August 12, 2018 at Prince of Peace Lutheran Church (2330 E. Calumet St., Appleton) with Rev. Brian Bankert of Trinity Lutheran-Appleton officiating. Visitation will be held from 3:00 to 5:00 PM on Saturday, August 11, 2018 at Wichmann Funeral Home (537 N. Superior St., Appleton). A reception will follow the service on Sunday at Butte des Morts Country Club. In lieu of flowers, the family suggests donations to the Fox Valley Memory Project or ThedaCare Hospice Foundation in Otto's name.