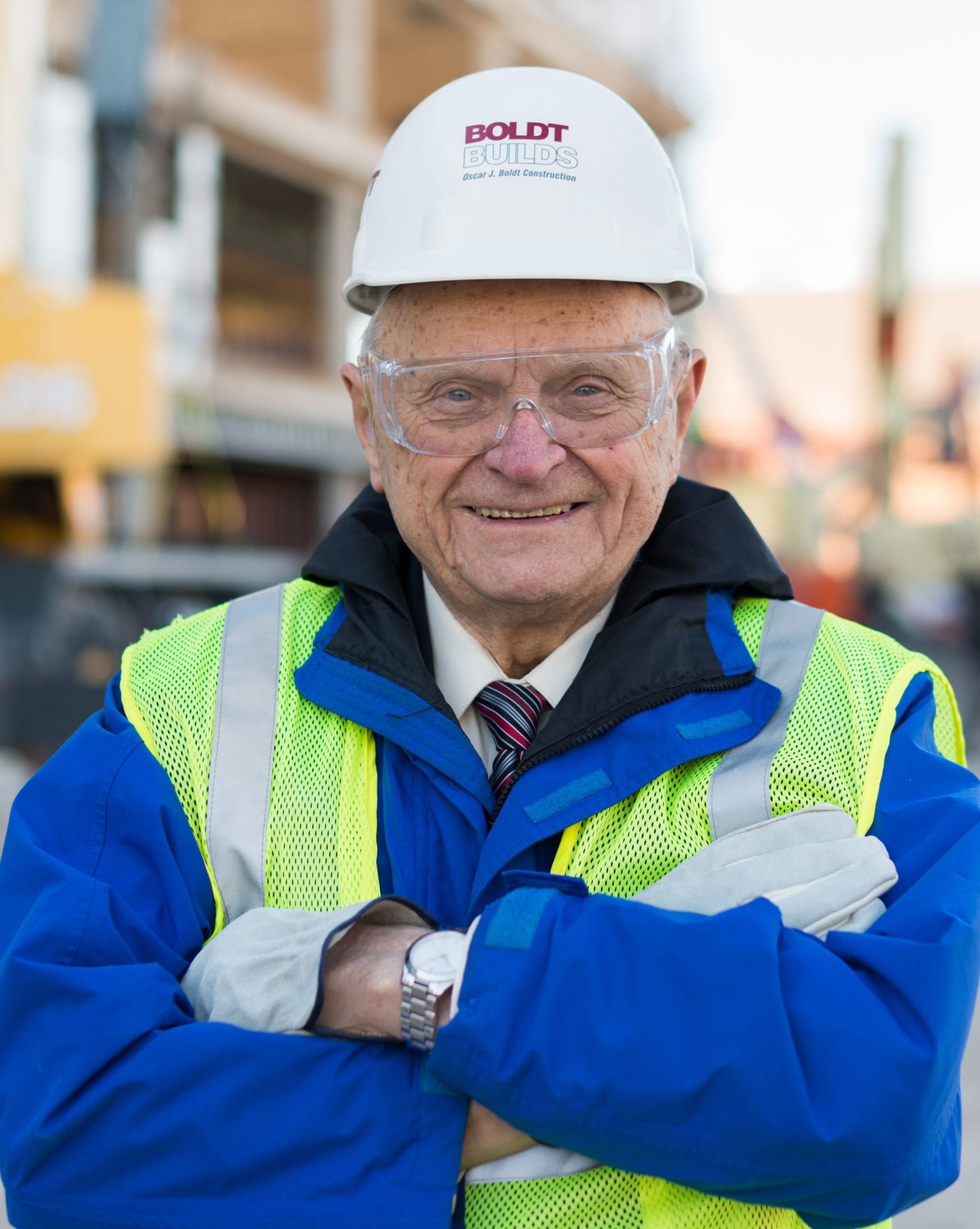 One of the Greatest Generation is no longer with us. Oscar Charles Boldt passed away the morning of June 9, 2020 at the age of 96 with his son and wife at his side. He was born Easter Sunday, April 20,1924.

With dedication, entrepreneurship and consummate business ethics, Oscar C. Boldt spent more than half a century transforming the family business his grandfather founded in 1889 into one of the nation’s largest and most highly respected construction firms.

In addition to working his full-time job of building a company, he and his wife Pat took on another full-time job of helping to build the communities in which he worked. They are benefactors of countless charitable organizations touching the arts, children, healthcare, education, and the environment. He volunteered in leadership roles on the boards of Appleton Medical Center, the Community Foundation for the Fox River Valley, Lawrence University, and was an active member of Appleton Downtown Rotary. He was honored during his lifetime with numerous awards from the University of Wisconsin and other institutions; and was inducted into the Wisconsin Business Hall of Fame in 2003.

In a note to the company’s 2,000 team members nationwide, CEO Tom Boldt said of his father:

“My Dad was extremely proud of all our field and office employees. He loved the company and the positive impact it has had on so many families, customers and communities. He was excited about what we will be capable of in the future.  And, he wanted us to have fun doing it!

“Oscar built a business based on honesty, and fairness, hard work, performance and a passionate love for construction,” said President and COO Dave Kievet. “These are principles that guide our team members on a daily basis and are the foundation of our culture.”

“Oscar’s energy and charisma were legendary, and he inspired us all,” said Jim Rossmeissl, a senior executive and member of The Boldt Company’s board of directors.

“For over 70 years, Oscar provided a powerful vision which created a culture of excellence and caring. It enabled the company to grow and has positioned us for continued success well into the future,” said Bob DeKoch, past president of The Boldt Company and board member,

Oscar C. Boldt learned construction under the guidance of his grandfather, Martin, and his father, Oscar J. Boldt. After serving as a B-24 navigator in the Army Air Corps during World War II, he graduated with a degree in civil engineering from the University of Wisconsin—Madison. In 1950, he became the third generation of his family to assume leadership of the company.

Oscar was active in the company up until his passing. The family will have a private funeral and a memorial service will be planned at a later date.

He was preceded in death by his parents Oscar J. and Dorothy (Bartmann); sister Lola Mae (J.O. Kopplin), and his dear and loving daughter Peggy Anderson.

In lieu of flowers, memorials may be sent to Memorial Presbyterian Church, 803 E. College Avenue, Appleton, WI 54911, the O.C. and Pat Boldt Donor Advised Fund at the Community Foundation for the Fox Valley Region, 4455 W. Lawrence Street, Appleton, WI 54914, Fox Cities Performing Arts Center, 400 W. College Ave. Appleton, WI 54911, a charity of choice or write a note to a friend you haven’t spoken with for a long time and tell them how much they mean to you.