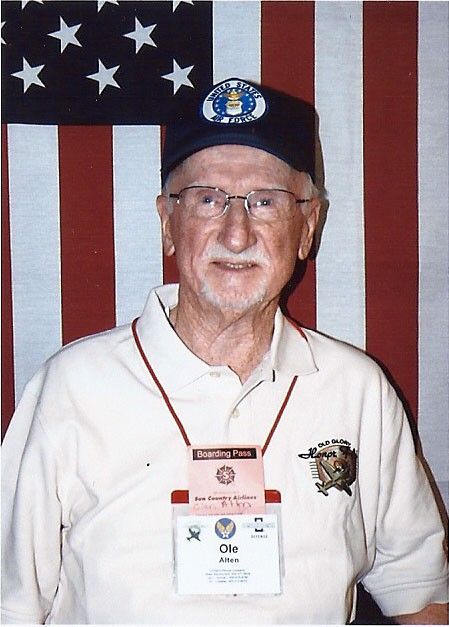 Olan Frederick Alten, age 91, of Appleton passed away peacefully with his family by his side on Thursday, June 11, 2015 at his home. Olan was born on January 20, 1924, son of the late Frederick and Mollie (Borneman) Alten. After graduating from Chilton High School in 1942, Olan worked locally until he entered the military in 1943. Olan was a B24 gunner in the Air Force during WWII. He then became a radio operator for various transports after the war. Olan served in the military for 22 years and earned the rank of Master Sergeant. He traveled extensively throughout the Middle East and Asia with the Air Force before he was married. Olan married Lucia Guckler on October 31, 1955, in a ceremony at Römer in Frankfurt, Germany. Soon after, the couple returned state side and raised two daughters. Olan loved Lucia dearly and they were married for nearly 60 years.

Olan worked at the post office before he moved on to an 18 year career with American Family Insurance. He retired with his wife in 1988. He also enjoyed big band music, traveling, golf and was an avid sports fan. Above all, he loved spending time with his family.

Olan will be missed by his wife: Lucia Alten; his two daughters: Barbara (Daniel Flagg) Alten and Debora Alten; his grandchildren Dustin (significant other Cassie Winters) Bethke, Danielle (Jordan) Olson, Demitria (significant other Benjamin Cumings) Bethke, Aviya (significant other Jason D'Agati) Alten Flagg and Moriah Alten Flagg; as well as his great grandchildren: Blake Bethke, and Huckley and Bryson Olson. He is further survived by many nieces, nephews, relatives and friends. He was preceded in death by his parents and his siblings: Douglas Alten, Jerome Alten, Marvin Alten, Frederick Alten, Audrey Stecker and Ruth Burbey.

The memorial service for Olan will be held at 11:00 a.m. on Saturday, June 20, 2015, at OUR REDEEMER LUTHERAN CHURCH, 1750 Midway Road, Menasha, with Pastor Stephanie Lorenz officiating. A time of visitation will be held from 10:00 a.m. until the time of service. Online condolences may be offered at www.wichmannfargo.com. In lieu of flowers, memorials may be made to Our Redeemer Lutheran Church, Menasha, Wisconsin, where Olan was a member for 46 years.

The Alten family would like to thank the staff at Affinity Hospice, especially Phil and Shelly for their loving care.