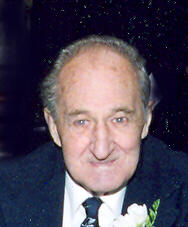 Norbert C. Stoeger, age 83, of Appleton, died on Friday, October 10, 2008, at St. Elizabeth Hospital. Norbert was born on August 19, 1925, in Kaukauna, to the late Joseph and Helen (Doering) Stoeger. He proudly served his country during WWII in the United States Navy. Directly after the war he was employed by H. C. Prange in Appleton. He then began his 60+ year career as a master carpet installer. Active as a carpet layer into his 80s, Norbert was the owner and operator of Carpet Craftsmen of Appleton (Norb's Carpet Service). He married Mary Jirikowic on May 29, 1976. He enjoyed fishing and the time they spent together at his cottage at Shawano.

Survivors include his wife of 32 years, Mary: his son, Michael Stoeger, Woodruff; his daughters, Laurie (Paul) Mueller, Waukesha; Michelle (Lynn) Coates, Appleton; and Lisa Young, Seymour; his brother, Thomas (Sandy) Stoeger, Appleton; his grandchildren, Kurt and Shane Stoeger; Nick and Cody Mueller, Michael, David and Jen Coates; and Kelsey and Emily Young; his six great grandchildren; and his great great granddaughter. He is further survived by nieces, nephews, other relatives and friends. Norbert was preceded in death by is sister, Dorothy Clements; his brothers, Harvey, Donald and Joseph; his infant sister, Joan; and his infant granddaughter, Dawn.

The Family would like to extend a sincere thank you to the special people that helped during the last few months, spending time with Norb: Barb and Mike, Judy, Jim and Ellen, John and Julie, Jodi, Mike and Fritz, Peggy and Don, Mary's daughters and their families, especially his grandchildren: Michael and David, and his “little pumpkin” Jen; also the ER, ICU, and 4 South staffs at St. Elizabeth Hospital, especially Dr. Deidre Flanagan.