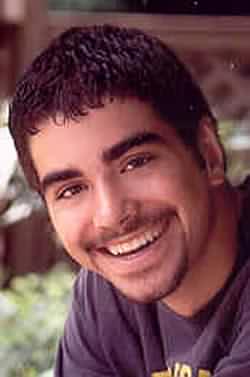 Nick Michael Hietpas, born February 23, 1985 in Appleton, WI to Bruce and Diane (Van Handel) Hietpas died as the result of an automobile accident. Nick attended Freedom schools graduating from Freedom High School in spring of 2003. Nick worked for his father at Hietpas Welding as a certified welder in Appleton and was currently attending Fox Valley Tech in the industrial welding technician program.
Nick earned a trip to the National Skills USA ‚Äì VICA competition in Kansas City, Missouri in June after winning a gold medal at the state competition held in Madison on April 24th. Students who win a gold medal at state and advance to the national competition are among the top 2% in the nation. Nick was one of the 43 high school students to compete in the contest that included metalworking, welding frame analysis, refinishing, estimating, plastic repair, and a written test. He earned a Bronze Medal (3rd) and became the first national medalist for Wisconsin in the collision repair technology contest and the first national medalist for Freedom SkillsUSA advisor, Bob Abitz. In addition to the bronze medal, Nick was also awarded a toolbox, paint gun, Miller welding helmet, and a trip to the Martin Senour Paint School, and a full scholarship to Wyotech College, Laramie, Wyoming which he was to attend in the spring of 2004. He was involved with the Freedom Chapter of Beat the Heat, and a member of the high school football team throughout his high school years.
Nick had a great love for hunting, snowmobiling, jeeping, dirt biking, and riding horses. He had a great love for his family and his numerous friends. He is survived by his parents, Bruce and Diane Hietpas, his sister Heidi, his maternal grandmother Jule Van Handel, his paternal grandmother Mary Jane Hietpas, aunts and uncles Tom (Mary) Van Handel, Wayne (Bonnie) Van Handel, Dawn (Mike) Vandenberg (his godparents) Debbie (Gary) Evers, Jeff (Diann) Hietpas, Sherry Jansen (Orin Zick), and Vicki (Jay) Biersteker. He also leaves behind many cousins: Brian, Rick, Wendy, Jason, Jessica, and Jeff Van Handel; Amy, Melissa, and Rick Evers; Gene and Dawn Hietpas; Michelle, Marvin, and Mandy Jansen; George, and Lee Langenhuizen; and Megan Biersteker. He was preceded in death by his maternal grandfather Harold Van Handel, and his paternal Grandfather Eugene Hietpas.
A funeral mass will be celebrated on Thursday, October 2, 2003 at 6:00 PM at ST. NICHOLAS CATHOLIC CHURCH in Freedom, Wisconsin with the Rev. Dennis Ryan officiating. Entombment will take place in the Star of Hope Chapel Mausoleumat Highland Memorial Park in Appleton. Friends may call on Thursday at the church from 2:00 PM until the time of the mass. A memorial fund is being established.
Nick, we are so proud that you wanted to be a part of our business and worked so hard to achieve your goals. It is impossible for us to express our sorrow in your passing. We love you very much.
Mom, Dad, and Heidi.
WICHMANN FUNERAL HOME
537 North Superior Street
Appleton 739-1231