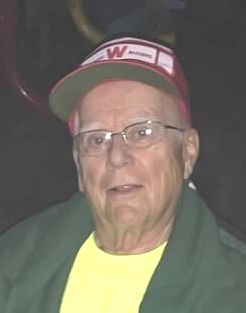 Nicholas “Nick” R. Kraft, age 77, was called to Heaven by our Holy Father and his son Jesus Christ. He passed away at Cherry Meadows after a brave 78 day battle with pancreatic cancer. He passed on June 8, 2019, peacefully with family by his side. Nick was born November 11, 1941, in Appleton, the son of Joseph and Irene (Beck) Kraft. He met the love of his life, Mary Lamers, while working at Miller Electric. They married on May 13, 1967, in Little Chute. They were married for 19 years until her passing in 1986. He began working at Miller Electric Manufacturing Co. in 1962 and retired after 35 years with early retirement. After retirement, he worked part time at Arn’s Cabinets for multiple years.

He enjoyed camping and taking road trips to Tennessee and South Dakota when his kids were young. Camping was also a favorite activity to do with his grandkids through the summer and loved watching July 4th fireworks by the water. He was a fan of NASCAR and looked forward to attending races with family. Bristol, TN was a favorite spot to visit with lodging in the beautiful Smoky Mountains. Nick enjoyed traveling to Walt Disney World and Hawaii with his grandchildren. He also enjoyed working on cars and was proud to be part of his sons racing team in the Sport Trucks series at WIR. He rarely missed an early morning walk at the mall where he would have daily conversations with new and old friends. He was a past member of the Appleton Jaycees.

Nick was a devoted husband and father (and mother when Mary passed) but nothing brought more joy to his life than his six grandchildren. His greatest passion and enjoyment was watching them participate in sporting events throughout the year. He rarely missed a game and told his doctor he needed to be released in order to attend the sectional high school girls’ soccer game the Saturday of his passing. He was their #1 fan whether it be baseball, basketball, lacrosse, soccer, volleyball, swimming or softball. He also liked to volunteer at school when needed and attended weekly Mass at the Xavier elementary and middle schools.

He will be dearly missed every day and missed at future family gatherings; especially, at his oldest grandchild’s wedding this July. We know how much grandpa wanted to attend the wedding but now believe he will be there in spirit watching over us.

Preceded in death by his wife, parents, father- and mother-in-law: Barney and Genevieve (Hietpas) Lamers of Little Chute; a brother: Walter Kraft; and a sister-in-law: Jeanne Klister.

Funeral liturgy will be held at 5:00 pm, on Wednesday, June 12, 2019, at St. Pius X Catholic Church, 500 W. Marquette St., Appleton. Inurnment will take place in St. John Cemetery, Little Chute. Visitation will be on Wednesday at the church from 3:00 pm until the time of the Mass. A memorial fund will be established.

We would like to thank ThedaCare Regional Cancer Center and ThedaCare Hospice for their kindness and support through our father’s diagnosis and treatment. Dr. Phillips and his team were beyond helpful and caring through his journey. Thank you to Cherry Meadows – words cannot describe how grateful we are for the devoted and caring staff who took care of our father during his last days. The peace and calmness our father experienced was beyond any expectations we could imagine.