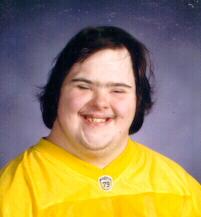 Age 19, died unexpectedly, Thursday evening, July 10, 2003. He was born November 10, 1983, in Kaukauna and was an area resident all of his life. Nick was a student at Appleton East High School and had just completed his junior year. He enjoyed riding his bike, playing with Matchbox Cars and spending time with family and friends. Nick is survived by his mother, Deborah (Richard) Hendricks, Appleton; his father, Mark (Kelly) Owens, Appleton; his brother, Robert Owens, Green Bay; his two half-sisters, April Owens and Ashley Owens, both of Appleton; his half-brother, Erick Van Cuyk, Little Chute. He is further survived by special friends, Alice "Allie" Williams, Clarence and Karen Dutton, Terri and Steve Wilkum, all of Appleton. He was preceded in death by his maternal grandparents, Ambrose and Evelyn Lemmers and an uncle, Michael Lemmers. Funeral service for Nicholas will be held at 11:00 am Tuesday, July 15, 2003, at the funeral home. Friends may call at the funeral home from 4-8 pm, Monday and on Tuesday from 10:00 am until the time of the service. A memorial fund is being established.