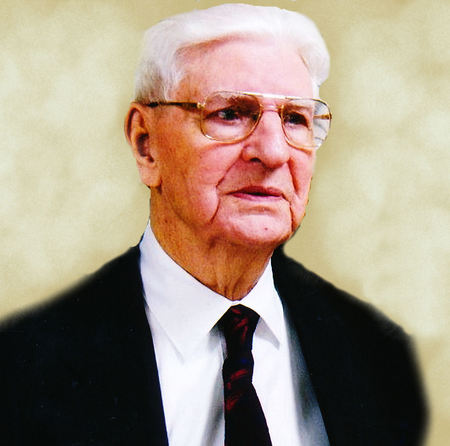 Nicholas L. Jacob has entered into eternal rest as of Sunday, January 19, 2014 at the age of 96. He died at The Heritage at Peabody Manor in Appleton, Wisconsin. Nick was born in 1917 in Appleton, Wisconsin, the son of the late Frank and Clara Jacob. He and Sedella Dudek were married April 19, 1941 at Sacred Heart Catholic Church in Appleton, but became members of St. Mary Catholic Church where they remained for the rest of their lives. Shortly after being married, he left to fight in World War II and is a Veteran of that war. Nick was a member of the Appleton Elks Club, YMCA Garden Club and St. Mary Catholic Church. He enjoyed traveling, dancing, and playing the piano and his harmonics.

He was preceded in death by his beloved wife of 72 years, Sedella M. Jacob. He is survived by his daughter Patricia Jacob Hannemann and son-in-law David Hannemann, both of Summerville, South Carolina. Survivors also include his sister, Marie Jacob of Appleton, Wisconsin. He is also survived by eight nieces and nephews, and was preceded in death by his brother Frank Jacob.

The funeral liturgy for Nicholas will be celebrated at 10:30 AM on Friday, January 24, 2014 at St. Mary Catholic Church, 312 S. State Street in Appleton, with Fr. Jim Leary, OFM Cap., and Fr. Bob Lexa officiating. A time of visitation will be held from 9:30 AM until the time of mass. In lieu of flowers, a memorial fund is being established in his name. Online condolences may be offered at www.wichmannfargo.com.

The family would like to thank The Heritage at Peabody Manor for the loving care they gave Nick.