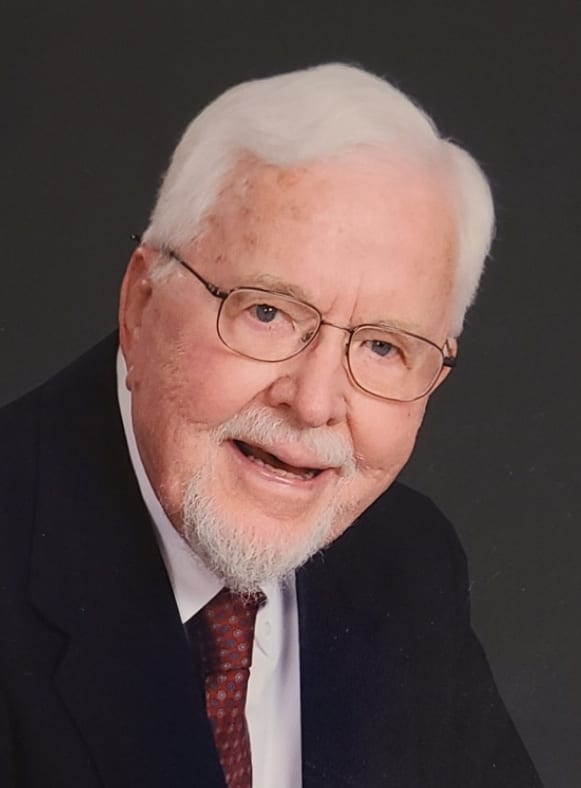 Neil J. McCarty
February 13, 1921 - November 12, 2020
Print
Email
Service
You may view Neil's funeral mass by clicking here.
A private service for the family is being planned for 11:00 AM Tuesday, November 17, 2020.  This service may be viewed by visiting this site at that time.

Neil was born in 1921 in Kaukauna, WI. He attended Kaukauna High School (Class of ‘38) and graduated from Notre Dame University, South Bend, IN. He served as a Communications Officer in the Army Air Corps during World War II. In 1946 he returned to civilian life and was accepted into Harvard Law School. While studying there, he met Patricia Kaough, a young woman from Lake Charles, LA, who was studying at Radcliffe College. They married on February 3, 1948.

In 1949 Neil received his law degree and returned to Kaukauna with his wife and an infant son. Neil established his own law firm that year in a one-room office on the second floor of the Bank of Kaukauna building. Over the next 38 years the firm enjoyed steady growth. By the time he retired in 1987 the firm employed twelve attorneys. Years later the firm moved to Appleton and asked Neil to use his last name because of the reputation for integrity and honesty attached to it.

While Neil worked long hours during the week, Pat was in charge of a growing family. They had a total of twelve children. Neil set aside weekend time for family visits, picnics, and excursions. He often sang old songs in the car to help lessen the commotion. As his children matured he was always an active listener who provided caring advice.

Neil was a devout Catholic and longstanding member of Holy Cross Parish in Kaukauna. He was devoted to the well-being of his community and was also politically engaged. He served as a Wisconsin delegate to the National Democratic Convention in Chicago in 1968.

After he retired from his law practice in 1987, Neil and Pat moved to a home near Jacksonport in Door County. While Pat oversaw a large garden, learned weaving, and worked with the Ridges Sanctuary and the League of Women Voters, Neil pursued an interest in writing poetry for at least a decade, and served as chairman of the town planning commission. He was passionate about preserving natural beauty and was an active supporter of the Door County Land Trust.

Neil and Pat enjoyed travel, visiting Mexico several times and attending elder-hostels in several European countries. They were particularly fond of Ireland, an ancestral home for both, and made a total of seven visits to the Emerald Isle.

Neil was preceded in death by his parents, Joe and Grace McCarty, and by his siblings, Janet McCarty Fieweger, Fr. Tom McCarty, O.C.S.O., and JoAnn McCarty Schultz, and by three children: Mary Elizabeth, Robert, and Daniel.

He is survived by his wife Patricia K. McCarty, and his children and their spouses; Joseph (Tony) of Lafayette, LA; Mary (Pat Quinn) of Inis Oirr, Ireland; Tom (Wendy) of Madison, WI; John (Shima) of Milwaukee, WI; Ellen (Ricardo) of Shorewood, WI; Laurence of Kimberly, WI; Teresa (Juvenal) of El Sobrante, CA; Margaret of Madison, WI; and Paul (Janice) of Appleton, WI; and by 20 grand-children and 10 great-grandchildren.

Due to restrictions related to the COVID-19 Coronavirus pandemic, funeral service and burial will be held privately.  However, that funeral service may be viewed in a live stream by visiting this site on Tuesday, November 17, 2020, at 11:00 AM.

The family asks that donations be made in Neil’s name to the Door County Land Trust  or to St. Paul Home Care Assurance Endowment Fund.

Service
A private service for the family is being planned for 11:00 AM Tuesday, November 17, 2020.  This service may be viewed by visiting this site at that time.
Charity
ST PAUL ELDER SERVICES INC, DOOR COUNTY LAND TRUST INC
Donate Now